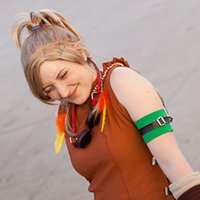 OMG Teeny took this photo at Youmacon 2012 and I pretty much died when she showed me it on the LCD screen! I didn't get around to editing it until now...but HOLY CRAP I've always wanted a battle stance photo like this *-*

ps: This was taken at probably around 2 or 3am and after I had been sick all day, thus...sleepy face! XD