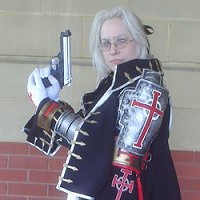 Note - There is no string on my bow as the convention was taking place in a public setting so there were strict weapons/props rules in place.