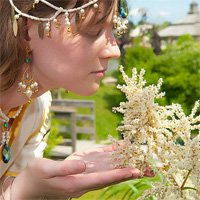 from costume A20
A20 - .hack
brightling I was going through photos from Anime North online and managed to find one or two of our .Hack crew, and this photoshoot in particular when we randomly ran into a bunch of other .Hack cosplayers. One of them saw me and went "A20! Do you want a big-ass sword?". How can you say no to a question like that. :3

I got a big-ass sword. The great absurdity of which being that I was cosplaying the .Hack universes perpetual 'noob' character, and the sword is a replica of one of the highest powered weapons in the game apparently. (To reiterate, I did not make this sword, just got to pose with it.)

Still wish I could have found photos of the sword off I had with a passing Cloud (Final Fantasy) -- I won! That sword was so massive, and massively AWESOME.