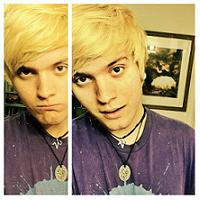 from costume Eren Jaeger
Eren Jaeger - Shingeki no Kyojin
KhalDevon I already did a rant on how much hell I went through making this in a WIP pictures, so I'll just mention the good parts ^_^

The main belt attaches to my belt loops, and the engine of the gear is held in place by some suspenders that are eventually hidden under my harness, jacket and cloak. The gear was made from many random things such as tabletop vises, spray bottles cut in half, Pipe ends, art board, posterboard, silver spray paint and of course, hot glue.

The swords are layered art board detailed with a tool, wrapped in foam at the handles (which were detailed as well) and have the squirter from a spray bottle attached to the triggers so they actually move! I noticed a lot of cosplayer's blades were bulky or too short, so I used actual measurements that were shown during a commercial cutaway in the series (They must have known kids were going to cosplay!)

The sheathes were the most irritating thing to make but I'm trying to stay positive here! It was made all out of Insulation sheet that I cut according to measurements straight out of the manga as well. On the opposite side of the sheathes are belts that attach to my hip, harness and waist so they hold themselves up correctly and stay true to the original design. The gas tank on them is from a PVC pipe with a wattle bottle tip and a mini book-light on the end!