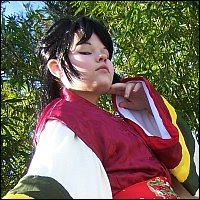 Hasu That is the name with which I am referred to by some netizens due to my less than normal appearance in Queen Esther. It's flattering in a really weird way. It's like being 4-chan'd. XD

So, random fact about costume: the cross on the top of my staff broke off three times before I got this picture, and once again before masquerade. And it still lives to this day.

Anyway, this picture is courtesy of SeraMunn on c.com. (did I spell that right? lol) Anyway, she and her group were excellent to associate with at AX and before masquerade, and her costume puts mine to shame. I love this picture because it shows my wig in one of it's best shades, and I had my skirt pinned higher so that I could walk, and thus the pearls on the hem are visible.

I just got back from what could be called a rehab cosplay retreat with inu-chan00 and samorooca from c.com. And...many photos were taken, which I will post later to make up for the utter lack of AX pictures I have.