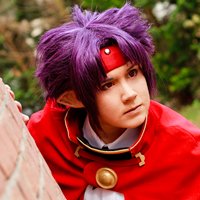 from costume Arika Yumemiya
Arika Yumemiya - My-Otome
Iloon Taken during the "finals" at the WCS "11, even this picture is a proof I still can't believe I really was there *.*

The costume, is FAR from perfect. Actually I am not satisfied with it at all!

Due circumstances everything had to be rushed within 6! days (making an act and props included, damn, I have been through HELL T.T NEVER EVER AGAIN!!!), so there was no time for details, finishing touches and trial and error. There was no time for making decent costumes, props and skit at all.

Damn... it felt so awful to rush the entire outfit of one of my most favorite characters and that even for the WCS where everything suppose to be top-notch.
Well.. I can tell you... my partner and I sucked and were afraid for being disqualified for sucking so hard x'D
I hope The Netherlands is still allowed to participate next year >.> I don't even dare to watch the footage of the act, thank god the pictures are not showing how bad the skit was.

After all, this costume is still one of my favorites so I will remake the entire costume when I will wear it next time. Only the wig passed trough my "quality check" so that one survived, everything else is burned to hell.

I have no idea who took the picture.