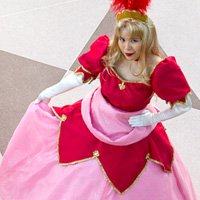 LadyoftheThread One of two new costumes I debuted at Anime Boston. It’s based on a picture from the Petshop of Horrors artbook and I’ve wanted to make this Count D costume ever since I first saw it over 3 years ago! ^_^

I went in more of a fantasy direction than a real kimono with my interpretation since the reference already had a mix of male and female kimono elements rather than looking like something that actually exists. I made the tops and skirts separately, with the skirts being based on a half circle skirt. (Yeah, I was somewhat inspired by huge Clamp kimonos ^_^;) The separate tops and skirts made it much easier to get dressed since I have no experience in how to properly put on a real kimono. ^_^;;

This was a pretty time-consuming costume since I wanted to do something more special for the designs than just painting everything on. All of the motifs are appliquéd on with gold thread and there are a total of 96 appliqués in 6 different sizes, ranging from 3” to 5 1/2”. (The 3” ones were the most difficult to sew because of the tiny curves!) Many of the appliqués were also handpainted with the flower, foliage, and water designs before being cut out. Sewing the appliqués took about 30 hours and I estimate the painting and cutting was another 15-20. See my album for a closeup of some of the appliqués.