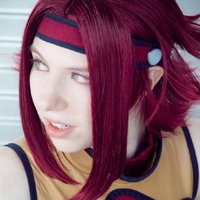 from costume Guy Cecil
Guy Cecil - Tales of the Abyss
darthmarysue It was Elemental's awesome idea to frame the crossed swords into the photo, which led to amusing discussion about which one should be 'on top'. (We switched them around later, but this photo was taken early on in the set.) Luke and I didn't want to get up and move to a new pose after this; we'd been walking around all day and it felt sooo nice to sit down.

I love this pose because it can be taken as the protectiveness of a best friend or slightly romantic, depending on how you prefer to view Guy and Luke's relationship. ryuuraigeki makes an adorable Luke as always.