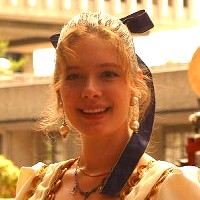 A child taken from a damaged mother, held by arms that are rotting from the inside out...

Hurray for my beloved cabbage patch doll, Alice, who played the part of Rose's baby so admirably. XD THROW BABY!! For notes on how the skin rot was created, see other photos in this album.

audioventchick Again, you make an absolutely perfect Dante/Lyra. The rotting is so creepy but so accurate! Peace, love, and crackerz! Shana \m/

xmissxhellx wow!!! ive never seen someone do a dante/lyra before!! horray for horrid skin rot!! XD [...no seriously... it may have made me sick watching the episode but it looks hella awesome... ^^;;]

Seed-chan Wow, you're an awesome Dante!Lyla. though imo, I think your baby is scarier than the rotting XD

hyperionwitch I really don't know the character (yet, hopefully--I am actively involved in reading/watching FMA), but it seems as though you've done a very nice job. And that rot is...kinda scary. In a good way. Obviously. ...Okay, I mostly just wanted to respond to part of your description. "Show me you're a real man, Rather Dashing!" But the costume is nice. And your description (on an early photo) on how you made the rot is quite awesome! ^^

SnakeLady You are officially cool for doing the rotting flesh makeup. ^_^