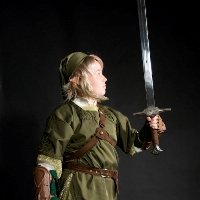 After we got our autograph and took a picture with him he asked to take OUR picture on HIS cell phone so he could send it to Jeffrey DeMunn who was the actor who played Dale on "The Walking Dead"! It was SOOOO AWESOME!

To top it, Norman Reedus's manager was there with the other two Boondock Saints actors and took OUR picture to send it to NORMAN REEDUS (Daryl from "The Walking Dead"!!!!!