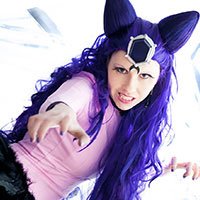 Kukkii-san After a really long break, here's another add-on to my ponytail tutorial.

This method is for ponytail or topknot styles that JUT OUT at the base and really defy gravity, so it takes more than a regular "stub" to support them. The key is adding a superstructure inside the wig and ponytail that will keep the style from sagging, even if the ponytail is narrow at the base.

So this is different from the more common "poofy ponytail" style, seen in a previous tutorial add-on:
http://www.cosplay.com/photo/2531977/

Before you use this method, please make sure you've read and understood the basic ponytail tutorial, which starts here:
http://www.cosplay.com/photo/1856065/
The process of putting a wig in a high ponytail remains the same, so I will not go into detail in this supplementary tutorial.

I'll be focusing on what's new and different instead: How to add a stabilizing structure to ponytail styles that are meant to STAND OUT!

(Full tutorial coming soon - to start the tutorial, click on the thumbnail that says "newer.")