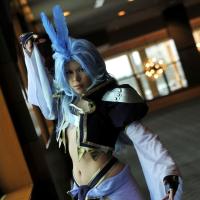 k_chan_009 This is one of my favourite costumes made so far. It is the ultimate Drive form of Sora from Kingdom Hearts II, and is called his "Final Form".

This picture shows the costume in Full, including my Oblivion and Oathkeeper which i made.

Okay, so about the costume:

Hair: Well, i'm used to styling this creature already! It required me to re-wash and re-style, which is a two day process

Necklace: It is a hand-made crown Sora-bling

Jacket: Made from White Vinyl lined with a cotton-like material. There is also black pleather on the binding of the jacket and the armour is made from a combination of materials.

Pants: They are basically the same as the jacket in regards to materials. To get the puff in the pants, i used a type of material which gave the "Sora-Balloon" effect.

Patterns on sleves and base of pants: I took the design of Sora's Final form markings and spent the great part of November finalising the direction, size in ratio to his clothes, and then ratio that to myself to get it as accurate as possible.

Pouches: Made from pleather and buckles from the local leather shop

Gloves: There is a combination of real white lamb leather, together with vinyl and buton snaps.

Shoes: They were created from a combination of glueing, machine sewing and hand sewing. To get the sora puff it needed toy stuffing and alot of slow gluing and fabric manipulation. Each Shoe takes about a week to complete.

Oblivion: I made Oblivion when i completed my defult Sora Costume in 2006. It actually need an operation after my trip to Manifest cause it to snap in half on return to Perth - but like in Lord of the Rings....Oblivion was born a-new!

Oath Keeper: Where would Final Form Sora be without his Oath Keeper! I had intended to only have Oblivion, but the week before Waicon i decided to make it. So, after having a day off from work i started carving...and Oath Keeper was completed 18 hours later! Its is far from perfect, but for 18 hours, it does the job