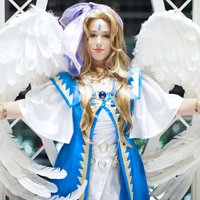 I had wanted to make this costume for the large Tenchi group that was coming together over a year ago. But I was unable to make it! So when I realized I could make Katsucon I decided it was finally time to make Tsunami.

Tenchi costumes are so strange! All these odd shapes and pieces that just don't make sense. There was a lot of time spent just looking at reference images and trying to figure out what certain pieces were for! Or how in the world they attached.

This whole costume is lined and when I could I would patchwork the pieces together instead of just heat bonding them.