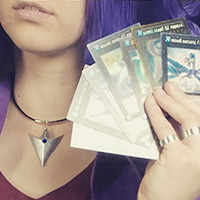 I made a viskei version of Kaiser, based on a fanart that Pixiv user Matsuhana Yuuya made!

The jacket is made out of a rose-textured navy suiting with an iridescent blue-black taffeta.The satin under-trim, the metallic braided trim, the rhinestones, and the appliques were all stitched on by hand and took over 20 hours to apply. The faux vest is made out of dull satin with a ribbon and sequin embellished netting overlayed on top of it. The cuffs and the yoke are brocade and all of the ruffs, as well as the cravat, are dull satin.

The feather pauldron is craft foam with feathers, rhinestones, trims, and buttons attached. The epaulette is made out of dull satin and peltex interfacing with rhinestones, fringe trim, and rattail that was braided together attached.

The belts were bought, but the belt buckles were made out of craft foam.

The sash is charmeuse with fringe attached at the bottom.

The boots were bought, as were the pants (which are white riding breeches that are still on order).

The wig is a Mako Green Jareth that is just trimmed and curled.