Psyche - Goddess of the Soul 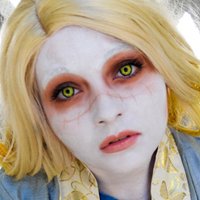 The myth of Eros & Psyche has always been a favorite of mine ever since I became obsessed with Grecian myths when I was 12 (even though Psyche is pretty useless & clueless). I'm still happy I found an excuse to sew her costume <3

Sewn for a friend's "Ancient World" party. I gathered as many references of Psyche in fine art that I could find, & ultimately decided to base most of the gown on the "Psyche entering Cupid's Garden" Renaissance painting, since the same gown was also used in another painting of her. I made it loose fitting in the waist & chest & cinched in the shoulders to match the gown in the painting. I found some gorgeous material for it, & I plan on adding more detail to her for when I re-wear her in February to Katsucon. ♥