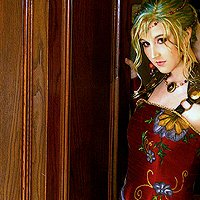 Myself as Chrono from Chrno Crusade. Photos by PopeCerebus and Eurobeat King at Otakon 2011.

Where do I even begin with this little guy? I have loved Chrno Crusade practically since I began cosplaying, way back when dinosaurs walked the earth (aka 2004). I've tried to get folks to cosplay it with me more times than I can recollect, but plans always seemed to fall through. FINALLY last year I lucked out by finding not one but TWO beautiful Rosettes (Vintage-Aerith and TheAnna) who were happy to remake their already gorgeous costumes in order to cosplay with me as Chrono. (Funnily enough, I have two OTHER friends who are also making Rosette in the near future, which makes this little demon boy a complete pimp, LOL.) I suppose there's some truth to the saying "good things come to those who wait." XD

All of that said, I attacked this costume with a LOT of conviction and spent the better part of three months toiling over every detail. The coat and capelet are self-patterned, as Chrono's ensemble has a very unique cut and fit to it. They, as well as the shorts and headband, are made from wool. I knew I was a glutton for punishment, making this costume to debut at a summer convention, but wool was the most plausible choice given the manga's time period and I knew it would give the coat the sturdiness and bulk it needed to support the "petals" along the bottom hem. The buckles are made of craft foam and cardstock, and the "button" on the capelet is actually a much smaller button covered in model magic, painted, weathered, and lacquered. The black undershirt is made from a stretch knit, all bias tape was handmade, and the discs on the undershirt sleeves are made from painted and lacquered vinyl with a hand-embroidered edge. The socks are made from a stretch ribbed fleece, to which I added the rows of black stitching which sadly do not show up very well on camera. The shoes are altered from a pair of oversized black oxfords, which were painted and weathered. The shoe's tongue, strap, and buckle are made from reinforced craft foam. The white shirt (which unfortunately is inaccurate, as I was unable to find a reasonably-priced dress shirt with hidden buttons) and black leggings are store-bought. I am wearing red circle lenses and ear prosthetics, though they aren't very visible in these shots.

Which brings me to the wig (aka my worst cosplay nightmare ever). I originally bought two long, gorgeous wigs from China in the perfect shade of plum - one for the wig itself and one to sacrifice for the braid. When they arrived I was heartbroken to discover they were incredibly thin, flat, and practically useless for any hairstyle as pouffy and thick as Chrono's. With only a few weeks left until the convention, I desperately ordered a neutral wig and matching extensions to dye. They arrived two days before the convention but, much to my dismay, the dye did nothing for the wig, turning it a weird shade of reddish-purple at best. With no other options and no time to play with, I grabbed the original Chinese wigs and took them with me to MD, where I spent a few days at my parents' house, desperately hand-sewing some of the extensions I had intended to use for the braid into the main wig. I put off styling the wig itself until the morning I was due to wear the costume and somehow, in a matter of 45 minutes, managed to spritz, brush, and blow-dry the back of the wig into something vaguely resembling a troll doll's hairstyle, which I sectioned off into (more or less accurate) spikes, the tips of which were secured with clear tacky glue. The braid is actually an entirely separate hairpiece that is secured to my wig cap prior to putting on the wig. I was picky about styling the back of the wig so that it blends naturally into the braid, rather than having the braid just pop out of the back of the wig. I am honestly dumbfounded that, after all the fits this wig gave me -- literally; I cannot tell you how many times I was in tears over it -- the darn thing managed to turn out looking pretty much as I envisioned it. Someone was clearly smiling down on me from above.

Long story short, this costume means a lot to me and I'm exceedingly relieved it's finished (except for that darned ammunition pack) and has survived the hottest Otakon on record. Expect many, many Chrno Crusade photos in the future!

Please no critiques/criticism; I'd like to keep this gallery happy! :3

Flying The Coop You make a great Chrono!

call_me_canada I love this series to death and you have done such a lovely job on Chrono. <3 <3