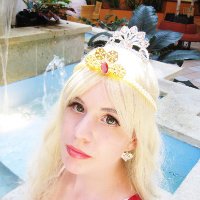 This is a picture of myself as Esmeralda from Saturday at MegaCon! I'm pretty sad, because this is the only picture I found of myself online, even though a ton of people took my picture throughout the day. I'm glad some people recognized me, though. I'll definitely get better pictures of this eventually, but for now, this is all I've got. xD

My skin looks lighter than I'd hoped because I ran out of my special dark makeup before the con, and ended up getting some crappy wrong colored stuff at a CVS instead, which only made me look slightly tan. xDDDDD This was taken by a bright window too, which didn't help. This was taken later in the day too, after I had sweated a lot of makeup off from walking all the way to a food restaurant outside the con. My left sleeve had also died by this point, which is why I only have one. And my crown isn't standing up either.... The list goes on and on, lol. I need to have a proper photoshoot in this costume soon. ;P

It was jolly good fun frolicking around the con as Esmeralda with my tambourine, though! And of course it was amazing being with my friends who would burst out into a chorus of Hellfire at random all day long, hahaha. XD

This picture was taken by RainbowSerenity. :)