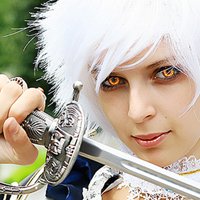 It's a convention photo and I just had to make a picture with sexy Hideki cosplaying Two Face as I was responsible for his make-up and wig.
Actually this make-up was a torture for both of us, because there was really hot and he could not spent even 10 minutes without having to correct his make-up.
So it's an exclusive shot though actually his make-up was already ruined by heat =__=
NEVER again I'll use snazaroo wax for make-up...

Never the less I think Hideki is an amazing TwoFace

My costume was based on an amasing art by Alex Garner.
I've seen millions of Ivy's costumes and I loved this one most of all.