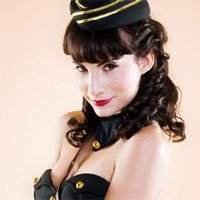 Torso of the muscle suit. I had to rethink how I was gonna do this halfway into the process!

daguru What did you end up doing? It looks like you used cusion foam. Did you cut it to shape first, then sew it in?

cutekawaii I cut out some foam and spray glued it to the top of the torso of a body suit. Then I just laid another layer of spandex over it and stitched in between the cracks. I initially was going to spray glue the top layer down too but that ended up looking messy.

summerres Wow, that is awesome.

ManiacMarshall You're going to make one of these for me later on... right?

cutekawaii you have no idea how many of my guy friends want me to make them a muscle suit now, marshall, lol.

Mgsfan1992 hey im making my own gray fox cotume for halloween and cosplay t conventions im having a really hard time with the suite do you have any pointers for me or maybe a rundown of how you did yours? thnks in advance for any help