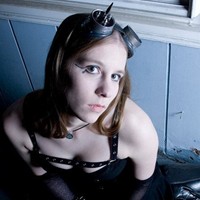 Sheikahchica Getting back on the Millenium Falcon after blowing up Jabba's sail barge and fighting through a sandstorm, Han was ready to kick back, and then caught an eye-full of what he had been missing while he had been blind from the carbon freezing.

This is our fan re-creation of the art piece of the same name by artist Chris Trevas (http://mffanrodders.files.wordpress.com/2012/07/his-vision-returns-by-chris-trevas.jpg).

This particular print the artist made was an exclusive and sell-out at Star Wars Celebration VI. I sadly was not able to get a copy . But thanks to my fellow Rebel Legion member Greg, who offered to pose as Han and the AWESOME Belgiun crew of the 501st who made this Millenium Falcon interior set - I had the fun of re-creating it! I believe this particular photo was taken by Greg's friend Suzi.