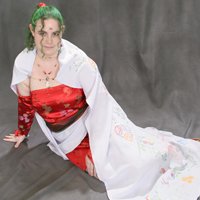 This costume took me nearly a year to complete, and during that time I worked on my figure as well. So a year after my Tsunade costume and 60 pounds lighter here is my Terra costume.

The dress, gloves, and band in my hair are all made from brocade (which took nearly 6 months to find a pattern that I liked). The dress is just a simple one piece and I altered a salsa glove pattern to make the gloves.

The shoes were originally just plain red. I painted the front in gold glitter puff paint and glued on the twine trim. The buttons had to be hand sewn on since they wouldn't attach to the hot glue properly.

The most work went into the cape though. I really wanted to bring out the Amano floral fantasy aspect of the Terra character sketches, so I arranged and embroidered (by machine, but none-the-less with a lot of time and work) the entire cape. The bottom is entirely embroidered with two lines going up to the collar which could be seen in the front when it was worn.

The larger sash (worn under the second) is made from the same material as the cape. The smaller one is just a thin transparent, colored pattern to try and bring out the colors and randomness often found in Amano's work.

All the bead-work is handmade, but not by me. a friend of mine made a bracelet, a necklace (so long it turned into a necklace and a choker), the cape clasp, earrings, two dangles for the ponytail, and the crown/headband.

The hair is my own just sprayed green. I know the Amano sketches had her hair blonde, but to me Terra will always have green hair. The tights were just floral patterned bought online. 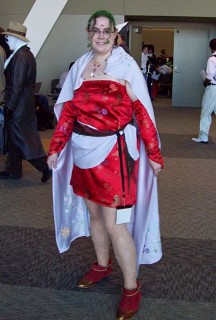 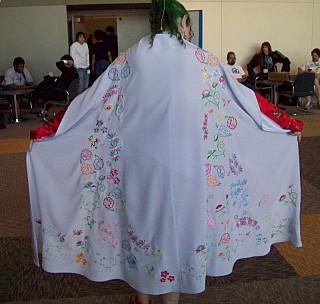 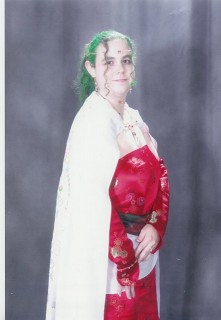 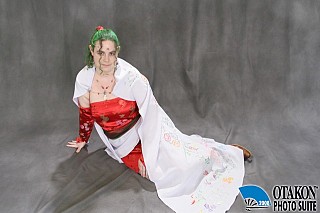 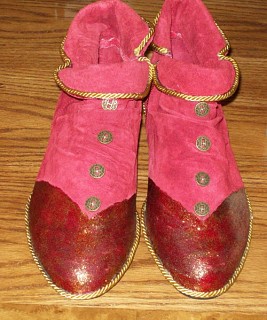 toeskater91 Hello, I ran into to you at Otakon 2008, you helped me set the precedent of running into a green haired Terra on Friday within the first 10 minutes of the con. Anyways, I thought your Terra was really nice, I especially liked the patterns on the cape and dress. Plus you had some pretty amazing shoes. Maybe I'll see you again at Otakon 2010 ^_^ Plus, I wanted to let you know that I have a ppic of the two of us together when I was in my celes costume. Here's the link ^_^ http://www.cosplay.com/photo/2212470/