I love steampunk. I've been excited about the genre ever since I played in my first Spelljammer game and even more so after watching Firefly a ton of times.

I wanted to create something from the ground up, so I came up with a concept of an inventor, who's a little absent minded and a little bit of a clutter bug. The idea was that at one time, because of her clutter and absentmindedness she was involved in a minor explosion that blew up on the right side of her body. Thus she invented a working eye monogoggle that helped her have a bit of her vision back and a shoulder piece to give her movement in her arm again.

She has a moving dog named Sir Russell Gizmo Alexander III, or Rusty for short.

She's also a crew member on an airship called Victoria's Revenge. (Its an online group of steampunk costumers) The symbol on her shoulder armor is the symbol of the crew.

Even thou she is mostly done, I plan on updating a few things. After wearing her the first time I realized what I have to do to update her. Small things here and there.

The arm piece is movable and the Goggle actually lights up. (http://www.youtube.com/watch?v=3s6XrSaTYMM) And Rusty's eyes light up, he barks, and moves... rather randomly.

The Monogoggle was made from craft foam, fake leather, a toy for the light, a pipe joint and a little kids sunglasses lens. I used D rings for the straps and it was all sewn together with upholstery thread. All the armor pieces were made with craft foam. Rusty was altered from a toy and painted. His goggles are actually nuts from a bag of nuts and bolts!

The Jacket, outer skirt, boots and corset were bought from thrift shops and altered using fabrics used in other areas of the costume. The bowler hat and cane were given to me by my boyfriend.

The apron I made and the tools in it in the picture were kids tools, but I currently own tools now to replace those. I hand painted a musket gun I found at a gas station. I now have a better gun as well. 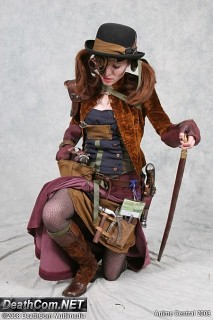 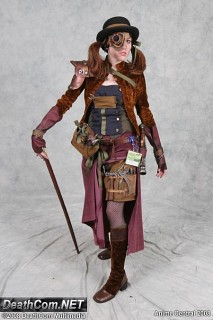 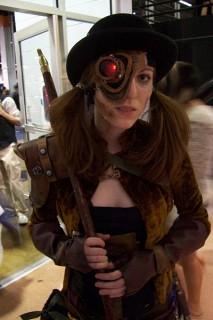 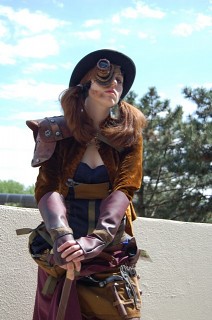 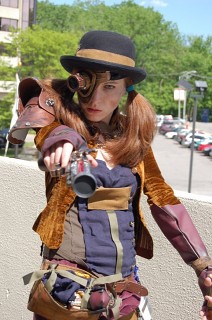 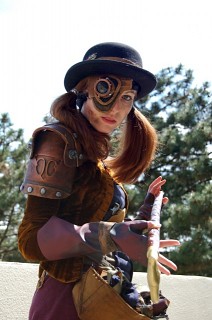 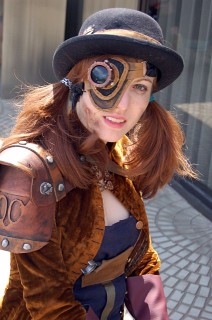 FairyDust Such a fun costume!

Tiddy This is great, really!!! I love Steampunk, and you've made such a good interpretation of it!!!

Domgigi These are all pretty sweet! I like your Steam Punk =)

Gaku_X *prepares to shanghai you into my crew*

Zergishzerg oh, man. how much did that ansamble cost you? looks damn good.

PandaClown Beautiful, the detail is stunning. I love it.