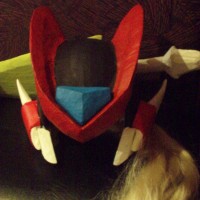 This was my first anime costume that I ever attempted. I though it would be easy since most of her costume can be broken down into rectangles but it still took me two summers to complete.

All details were hand-painted on, after I laid it out with chalk. The dress turned out not bad, but I was really happy with the obi. The sleeves are rather stiff due to using a lot of paint--red and white--to get the graduated effect.

The wand is another issue altogether. It was made of three layers of cardboard papermached together then painted and inserted into a broom handle. However, the moisture from the paint and papermache soaked into the cardboard, causing it to warp. Not using cardboard as a base again unless I somehow seal it first. 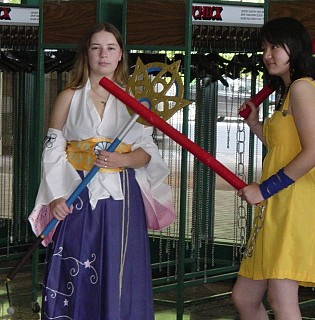