This costume was done back before I could sew. My friend Heather made the shirt, pants and cloak for me; they were all done white, and I dyed it all together (along with the gloves) to the same uniform biege color.

I did all the props, make-up and accessories: I made the "rock" prosthetics and devised the facial special effects; styled/colored the wig; stained the belts black; made the cloak gem; made the sword and sheath; did the hands and gloves; and made a prop sweatdrop.

My face and hands were actually textured, and felt like rock to the touch. The dark parts on my face felt rougher, like sandstone, while the lighter parts felt like smooth marble. The full make-up job took anywhere from 2 1/2 hours to 5, depending on the circumstances. And it gave me REALLY bad acne. I won't repeat the method here, because I realized after the fact it was probably one of those "don't try this at home, kids" things. (I was a little crazy. I actually -slept- in that crap once.)

The fingers were also textured and felt like sandstone or granite. These were easier to manage than the face make-up, since I was actually wearing two pairs of gloves; the "stone fingers" gloves, with the cut beige gloves over that. Unfortunately, the gloves I bought for these only went just past my wrists, so my normal flesh-tone arm would show from time to time when my sleeve pulled back.

The wig is absolutely atrocious. It was the first wig styling I'd ever attempted. (And there's a reason none of my posted photos show it from behind.) Ah well, it was a learning experience.

The cloak gem is made from paper clips, Model Magic, and a plastic ball swiped from a playplace (either Chuck E. Cheese's or McDonald's, I don't recall which) that I cut in half with an X-acto knife.

I made the sword from wood, with a length of PVC pipe for the handle. For stability, an extension of the blade was included inside the PVC handle. The raised hilt details (including the gold diamond shapes, the ridges at the top of the handle, and the ridges and gem at the butt of the hilt) were done with Model Magic. No power tools were used. I sawed the wood out with a handsaw, whittled it with X-acto knives, and filed and sanded it by hand.

I also had a little sweatdrop accessory that went with it for laughs. 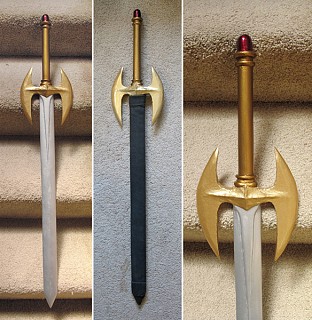 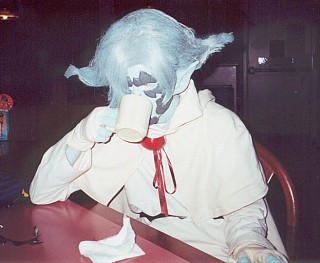 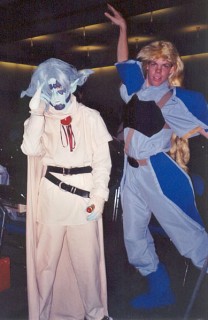 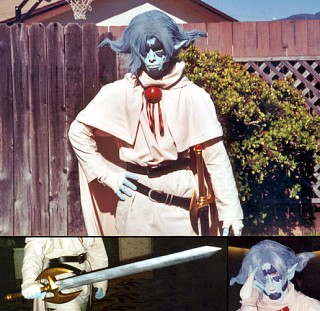 Angelic_Sabyne I remember this costume! I was always so impressed by it.