I really grew to like Zoey as a character when my boss bought me Left 4 Dead for my birthday in June 2009. Every week or so my boss, my co-worker and I would play a campaign or two for fun and we each became attached to different characters. I loved the little quips Zoey came up with and I identified with her. Given that I have brown hair, I always pondered Cosplaying Zoey using my own hair. I was a little worried about finding shoes and making the jacket so I didn't think about Cosplaying seriously until I walked into an Ardene's accessories store in March 2010 and found a cheap pair of converse-like shoes for $13. For that price I figured that I could put together a Zoey costume fairly easily.

The pants and belt were easy finds. I already had them in my closet. I was really lucky that I was able to pick up a belt in the States randomly while I was at a Meijer. I bought it just for regular wear since that type of belt is harder to find in Canada, but is perfect for my small waist. The t-shirt that I wore under the jacket was also purchased at Ardene's for $10. I wanted to buy a cheap shirt so I wouldn't feel bad about dirtying it. XD

Of course, the hardest part of the costume was the jacket. I ended up having a lot of trouble picking fabric for it. I went shopping with Pan in mid March for material and I bought a very salmon pink fabric. Zoey’s jacket is called red by the game creators, but in the game it often appears as a very dull red, more like salmon pink. Unfortunately, the salmon pink material that I bought had a very orange-pink look to it, so it felt too off to me from the original concept of it being red. I ended up buying different fabric with my friend Sakura soon after. The second fabric actually was very much a red and that's what I ended up using. Depending on the lighting it does take on a bit of a pink hue so I decided it would be the better choice to work with. It's still not exactly what I wanted, but c'est la vie. This was meant to be a fairly simple costume given that the only handmade part was the jacket.

The red fabric was t-shirt material so it didn't work quite as well for the jacket. I picked out a pattern that I wanted to work with in advance of a sale on McCall's patterns at Fabricland, but when the sale was on, I found out that the local stores were sold out of the pattern that I wanted. I scrambled to find a replacement and I purchased pattern M5891. The pattern was better than the original one that I wanted because it had a flat colour and not a hood, but the pattern was meant to be quite baggy, long and loose on a person. Zoey's jacket, on the other hand, is quite fitted and short. I attempted to reduce the size of the pattern and got it to an appropriate length. The fit, however, caused problems. The back ended up being huge. A week before the con I had to take out the back and it needed to be cut out again and re-sewn.

The material also was a pain to deal with when it clumped together in areas like the sleeves and around the collar. This was especially hard to work with when the piping was added to the pocket and to the sleeves. The piping required double sewing around the sleeves to get it to sit snugly against the seam. Thankfully adjusting the pattern to add the white detailing under the arms worked out nicely.

I love the look of the zipper Pan helped me pick out! However, there are still some issues with the length of the back of the jacket that have not been resolved and I don't think that I have enough material to re-sew the back. Given that this was meant to be a short lived costume I think it worked out well enough for the times that I've worn it.

The final details on the jacket, of course, were adding the dirt and the small torn logo on the right side of the jacket. I made up the logo design on my computer and I added it using an iron-on transfer. The dirt was replicated on my jacket using maple paint, a small amount of dirt and bronzer from my makeup to give it a bit of an aged effect. I think the dirt effects worked out nicely. I should probably add more. The dirt on the white shirt, was added using actual dirt and bronzer and the dirt on my pants and shoes were small amounts of actual dirt. I wanted to make sure that the parts of the costume that weren't the jacket could be saved for everyday wear.

I decided to invest in a first aid kit by 16 Bits of Fashion Fury on Etsy because they look fantastic. I got one of the original batch without the first aid detailing. I did attempt to get an upgrade and get one with detailing, but there was a mix-up so I decided to add the detailing myself using an iron-on transfer, which worked out reasonably well. I also covered a zipper on the front of the pack with a backpack strap to make it more accurate to the in-game design. The pack is quite nicely done. I love the fact that it's functional. It came in handy when I was lugging around my stuff on Sunday of AN (although with all my heavy stuff it weighed down the poor health pack terribly). XD

Finally, Pan and Adrien were awesome and whipped me up a holster for my belt because I was working on my Asuka costume at the same time and I was running out of time before the con. It looked great! Adrien also got me an M16 toy rifle gun, which he slightly modded to more closely resemble the gun in the game. It was an awesome weapon to have since that's my favourite weapon to use in the game.

I was hoping putting together a Zoey costume would be fast and simple, but it turned out to be quite a bit of work. Many thanks go out to Pan, Adrien and my mother for helping me out with prop working and sewing. My mom often bore the brunt of sewing some of the thick fabric of the jacket together when I couldn't get the piping to line up properly. (&gt;.<);; Many sewing needles for the machine were sacrificed in the making of this costume!

I Cosplayed Zoey on Sunday of Anime North 2010. I kind of rushed making this costume because my hair had grown out long enough to be put in a ponytail. Using my own hair for this costume worked out with mixed success. I'm not a big fan of my rather high hair line, but it was nice not needing to worry about a wig. I'm not really a fan of my hair when it's a little longer so I had plans to get it cut in June. I had to rush doing some shoots post-AN to make sure I could get some shots while I could still wear the costume. Many thanks go out to Pan and Stillvisions for rushing to do a shoot with me in my area! I may look into getting a wig, but it's a fairly casual costume that has some problems with how it fits so I may never get a chance to Cosplay Zoey again. It was awesome Cosplaying Zoey, though, and adding another great female protagonist from another awesome horror game franchise to my list of video game characters that I've Cosplayed. (^_^) 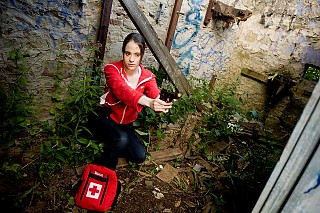 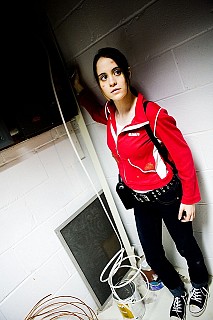 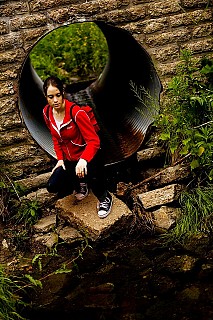 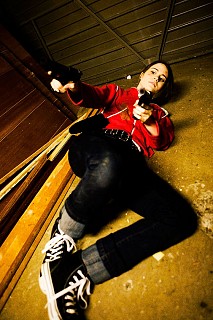 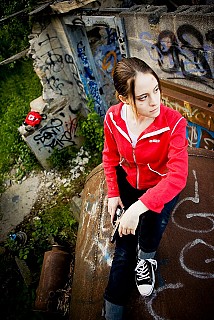 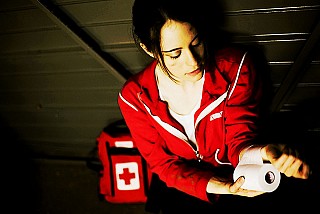 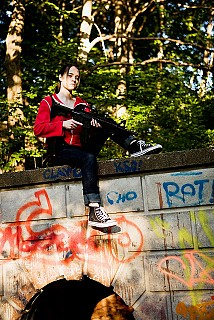 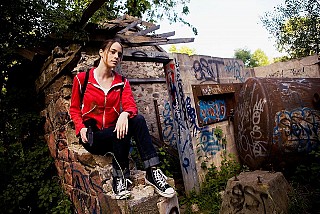 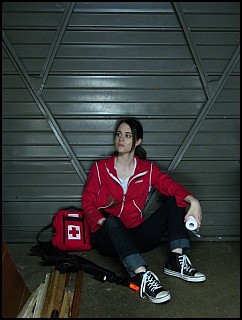 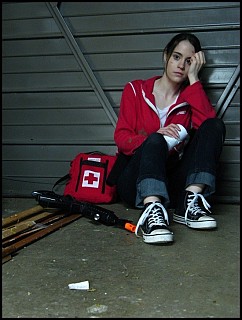 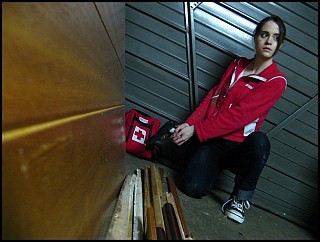 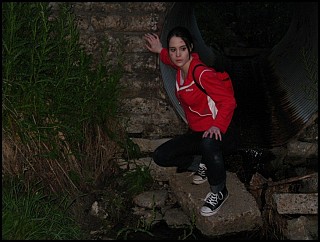