This is another series my boyfriend got me hooked on. I had no idea I would get this addicted to it, either. I love so many of the characters, but I had to start off with just one, so I picked Reimi - she's adorable, and I love her role in Part 4, which happens to be one of my favorite parts, second only to Part 1. She's the ghost girl who helps the protagonists in their mission to find and stop Kira, who murdered her 15 years ago. And her Pocky divination is so cute, too. The outfit isn't too difficult either, and it's something I can get ready for Fanime and complete in a short amount of time to show my Jojo love.

It's no secret that the artwork is very inconsistant in JoJo, so I had to work with that and figure out which variation I wanted to stick closest too. In the end, having it perfectly accurate is impossible because things are constantly changing (the armbands and the straps on the sandals, especially).


The main dress was made by altering a blouse pattern heavily, I ended up making my own mock-up for it in the end so it would fit right and because the neckline is a bit weird. I used pink linen for the dress, I couldn't find any color references as this is a character the only appears in manga and I noticed cosplayers tend to pick their own color scheme, so I went with what I thought Reimi would wear just based on her character. One thing that was mentioned is that she has pink nails, and I naturally thought she was a blonde when I was reading the manga, so I went with those two things and worked around it to make a compatible color palette. The seams in the dress are finished with a serger, and I incorporated darts and seams for a flattering fit. I decided to install a zipper in the back and have the button down look be 'faked', since the dress is fairly short and the last button is kinda on crotch level, and I don't want to have to worry about these things when wearing the costume. I like to take practicallity into consideration with all the garments I make, and this was the best choice for me. I used a stretch knit to make the armbands, which were a bit of a pain in the butt to make because of the straps at the bottom. Trying to cut stretch knit without making it look jagged is a bit difficult. The neckband is just some fabric sewn into a strip that snaps in the back, and the handshake pendant was made out of Paperclay, painted, and sealed. The sandals were purchased and no alterations needed - they were a pretty nice find! The wig was purchased and styled accordingly, but was pretty much spot-on already. 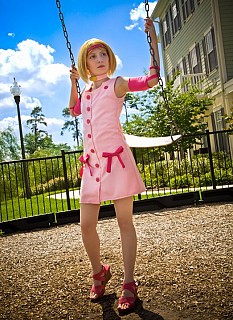 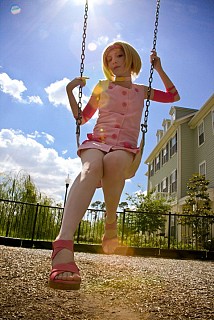 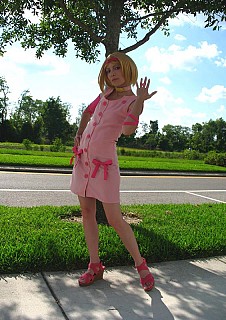 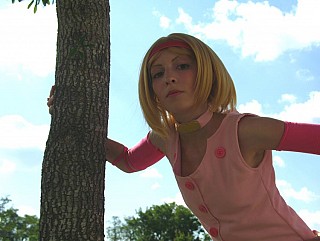 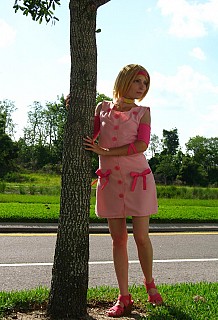