Drafted all my own patterns. This costume is based on a combination of the anime design and the live-action stage musicals.

The juban and kosode are separate garments made from cotton sateen.

The hakama are cotton twill with a silk broadcloth himo. The fabric in the back is a double-width, giving me 6 pleats in the front and in the back, because Bleach shinigami seem to have a ridiculous excess of fabric blousing out everywhere. The inner folds are edgestitched on the inside to help maintain the pleats. The front himo actually does not tie in a knot in the back; it velcros over to eliminate bulk, thus allowing the back pleats to fall straighter. There's a large, double-interfaced square "tag" sewn into the back himo which tucks into the front ties, helping to keep the back half of the hakama in its proper place. This is an adaptation of modern kendo hakama, which have the plastic or wooden insert that slides into the himo.

The black designs on the captain haori were my first machine embroidery project. I created the custom art in Photoshop and digitized the designs in Embird Studio. The blue lining is silk broadcloth that was custom dyed with Jacquard Acid Dye. There's a white silk interlining in the haori as well to prevent showthrough.

The scarf is made from silk crepe de chine that I dyed to a custom color. It was sewn in two layers, turned out at the inside center back and slipstitched shut.

The tekkou are made from cotton sateen. Since tekkou are supposed to be a form of vambrace (commonly worn by travelers in feudal Japan), there is a thin layer of batting in them that I diagonally cross-quilted on the inside. They fasten with the same kohaze (tab-and-loop) system used in authentic tabi. I took an old pair of tabi apart to salvage the metal tabs and figure out how the construction was done.

The kenseikan hair ornaments are made from craft foam coated in Elmer's glue and metallic white acrylic paint, with separate hair extensions glued into the inside grooves. They had to be sewn into the wig while I was wearing it in order to get placed properly.

The sword is a bokken that was cleaned up with wood filler and lots of paint. The custom handguard was made from dense cardboard sandwiched between two layers of craft foam. Normally I like to make my own weapons, but 1) I didn't have enough time, and 2) the skit this was for involved some sword fighting, and since Renji's sword was a bokken, I decided to match so that our swords could withstand the mutual abuse on level ground.

The original haori got destroyed when I tried to spot-clean it after 2 cons and a park gathering. Once water got into it, the lining bled like crazy and stained the entire thing a tie-dye blue. My guess is that I didn't put enough vinegar into the dyebath to properly set the color.

Consequently, I had to remake the damn thing. I decided to draft a new pattern, redistributing the flare and adding more compared to the original pattern. I also ditched using silk in it because the first haori had weird disproportion issues while making it - despite using the same pattern pieces for cutting the layers out, somehow the silk lining had ended up at least a full inch longer than the cotton twill outer fabric and I'd had to take half the garment apart in order to remedy it. To avoid a repeat, I just used cotton for the interlining and lining in the second haori. The interlining was more white cotton sateen, and the lining was a thin midnight blue Egyptian cotton broadcloth. The final product is slightly heavier and warmer than the first haori, but not by all that much. This lining was also a better color match to what it should have been.

Because this new haori had a larger hem circumference, I had to redistribute the border design, which meant adding in more elements and at a tighter spacing that made the embroidery process slightly trickier.

Based on a suggestion I replenished my embroidery thread stash with a different type, and this was something I quickly came to regret. I had to re-digitize all 3 of my designs because of this, and the tension adjustments I had to make caused the machine to throw fits much more frequently. I had to babysit the machine during much of the embroidery stitch-out to listen for the KERCHUNK of Doom and stop that bastard before it made like Internet Exploder and screwed everything up. Despite all the frustration and near disasters though, the embroidery on this one came out a LOT cleaner. However, I will never be using Robison-Anton thread again if I can help it.

I also decided to remake Senbonzakura. The bokken was rather heavy, I was sick of the fact that I couldn't put it down unless the hilt could hang free or else the tsuba would get damaged, and I still wanted to make my own sword from scratch. The new sword was made mostly from poplar wood, with some hilt detailing and body done in paperclay. I used lots of wood filler to smooth the surface out, and used a better varnish after painting which proved to be far more protective and durable. The hilt was then wrapped with bias tape held with super glue. The final product is MUCH lighter than the bokken and a lot more elegant. Since the blade was thinner, I was also able to downsize the tsuba accordingly. And best of all, I can actually put the sword down more easily. 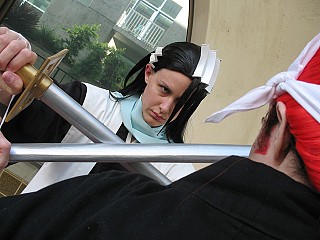 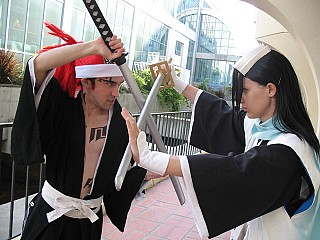 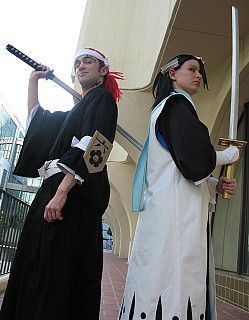 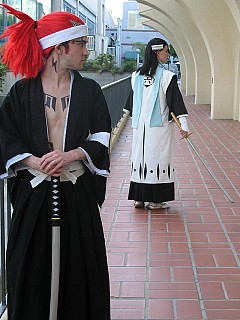 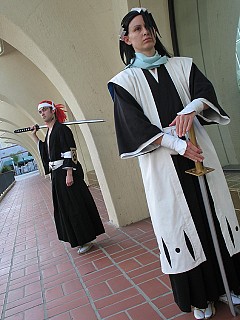