This was a hell of a geometric adventure. It doesn't look like it, but it was, especially in trying to adapt Japanese garments to a Caucasian body type. I guess you can consider this version 1 of the costume, because I'm definitely not satisfied with it as it is now.

Since the Basilisk series takes place in a historical setting in the year 1614, I decided to make this costume as historically accurate as I could, within reason. I didn't go so far as to do all the sewing by hand (because I definitely don't have the patience for that), but all the materials are fabrics that would have been used (or could have feasibly existed) in Japan at the beginning of the 17th century.

The white juuban (underlayer "kimono") is made of cotton sateen. The Japanese had been trading with the Dutch and Portuguese for about a hundred years by this time and did have access to cotton textiles, though only the extremely wealthy or those with connections would have been able to acquire it. (I figured a long-lived ninja lord from one of the most powerful clans in the land could have the right connections.) The satin weave had been in existence since at -least- the Middle Ages in Europe (if not earlier), and while I don't know whether it actually DID have any presence in Japan, it's hypothetically possible for the textile to have found its way there through trade. (I really wanted to use this material, because it's very comfortable, soft, and temperature-regulating. All this was my justification for it. 9_9)

The purple kosode (outer "kimono") was made of smooth silk. The split-legged hakama are a linen/rayon blend; it technically should be 100% linen, but 100% linen was really hard to find. I got reassurance from an active SCA member (a former co-worker of mine) that a linen/rayon blend would work just as well and was often used by reenactors anyway. The haori (sleeveless "vest" garment) is also made of linen/rayon in the same weight and texture as the hakama, and is lined in silk taffeta.

The waraji (straw sandals) were imported from Japan, and the tabi were acquired for me by my sweet friend Dark_Wings.

Ninety percent of the sewing is French seams. The remainder is full double-sewn enclosure (like at the neckbands or where the hakama ties meet the hakama body). The only places where the seam allowances are not fully enclosed in some way are the sleeve closures on the purple kosode. And because linen frays like a BITCH, I was doing a hell of a lot of zigzagging as I worked on the haori and hakama.

Because of Tenzen's exposed hairline, I attempted to temp-dye my hair for the first time so I could make it look more natural rather than use a wig. (My real hair is auburn; the character's hair is black.) Unfortunately, this was an absolute failure. My mom (who dyes her hair regularly) helped me with it and REALLY did a good job getting it thoroughly in my hair, but 2 1/2 hours and 3 bottles of dye later, when it came time to rinse after letting it set for the necessary amount of time, it all came right out. -_- My hair was dark-er than normal (especially when contrasted against the powder blue haori), but in many photos it came out noticably auburn and I had to do some Photoshopping.

My hair "boomerangs" were styled with a hell of a lot of pomade, with a little bit of hair spray. It mostly held the shape, but after half the day had gone by, the boomerangs would start to come apart a little from their own weight and I'd have to mold them into one solid piece again. This was the nastiest crap I have ever had in my hair; my hair was seriously like clay. And it would not come out, even after a week of scrubbing the hair with dishwashing soap. I had to finally resort to cutting them up to my eyes in order to be rid of the perma-goo.

I didn't have time to make the props I wanted (a katana, wakizashi, and scroll), but I did have a few needles I posed with on occasion.

The two most amusing parts of this costume were...
1) I casted warts from latex for my ear lobes, and had fun blending those in to make them look natural.
2) Because I love to put realistic details into my recreations, the hakama has a functional fly in the crotch made from two overlapping diamond gussets. (Remember the ship scene, anyone? 9_9)

I have a lot of touch-ups I want to do for the next time I wear this costume. Next time I'll have a wig and props. And I might remake the hakama with more material to make them fuller. I also need to make new tabi, because the ones I had shrunk in the washing machine. &gt;_< 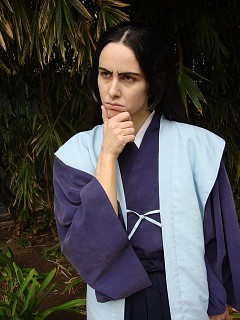 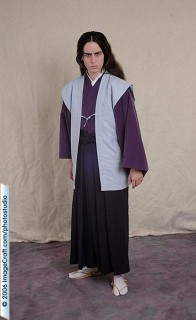 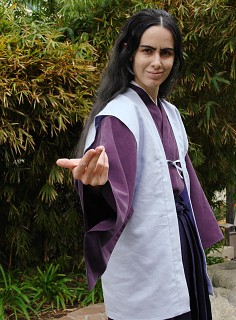 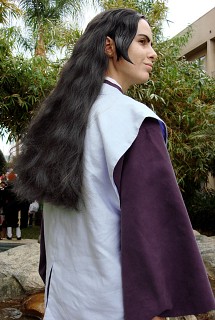 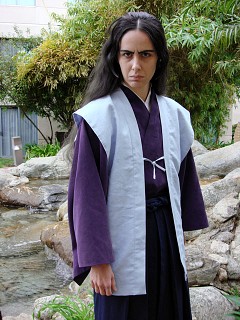