This was the first crossplay that I began working on for our mini Fullmetal Alchemist group. This costume was probably the most entertaining to work on because the convention seemed to be a far ways off and Ed had always been my idea of a good first costume to make.

The coat was tons of fun to make, but since it was only my second sewing project ever when I look back at it I really get the urge to redo the entire thing! At first I wanted to make this a Briggs variant, but I later realized that since I was time constraint and that I would have to modify the coat a lot more than was really worth it, I stuck with the common one. Taking off the white fuzzies made me a little sad. the symbol on the back was painted with fabric paint. I don't really wear it much with the rest of the costume anymore since the automail is too big to fit into the sleeve.

The under jacket was done in no time, but the clasp was placed much later. I swear I'll never use Iron on velcro again! I just couldn't figure out how to get it to stick. This jacket was only used by my friend when she cosplayed I wore it for an hour one day at a con, but I doubt you'll see me wearing it at all.

The pants I bought from forever 21 in the sales section (Whoo hoo!).

The belt really needs to be re-made. It's falling apart and looks terrible. I think I'll make a new one if I cosplay Ed again.

The automail as of now goes all the way up my arm, but can't be worn with a jacket. It is made entirely out of craft foam and varrying types of hot glue/glue and a bit of gesso and sculpy mold maker clay. I"ve been through four different versions of automail so far &gt;.< so many hours of my life wasted painting glue on craft foam.

My dragon spear thing was made with a mop handle, card board, hot glue, clay, and wood filler. First I cut out a vague cardboard version of the spear head then I glued it on to the mop handle, which I sanded before hand. I then coated the card board in wood filler and then sanded and then coated and then sanded and so on. I ran out of wood filler, but I would have continued the process till I had a smooth surface. Wood filler ended up being much heavier than I expected when used in bulk :O and I didn't have enough to get a smooth surface without sanding all the way down to the card board so I suggest using another material. I then painted it and used sculpy to make the dragon at the base of the spear head.

I think I'm retiring this cosplay, or at least this variant of it. If I do cosplay Ed again I'll probably be doing the Briggs version of this cosplay. 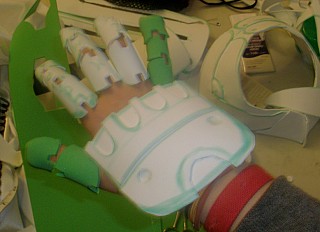 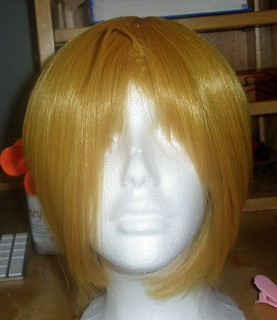 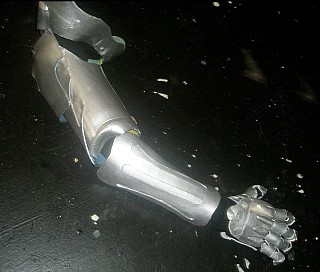