This costume is an example of mish-mash. I kinda dig the EGA/dandy look, so I put some things together to make an EGA outfit with a slight Japanese feel. And it's a demon, because I can't do an original costume that doesn't end up getting vamped or demonized in some way.

The pants (originally made for another costume) were made using a commercial pattern that was altered and tailored to hell. They're made of stretch suede - which isn't really suede, but a sandwashed polyester that has a suede-like feel.

The coat-tailed haori was drafted from scratch. The black and the maroon contrast are dull satin, and the white edging is a white-on-white brocade. The lining is...a poly-cotton, I think. Probably the same stuff I made the JENOVA dude's robe from. Everything's edge-finished on the inside because satin frays like a bitch.

The tail was handsewn years ago before I had a machine. It threads onto a very narrow belt or a wide ribbon that ties onto my waist under the wider belt.

The wide belt was a gift for some volunteer work several years back. The leather gloves were picked up at a Ren faire, and I slit open the fingertips and added in the 2" claws.

When I originally did this, it was just a mish-mash of stuff I already had in my closet or had made from other costumes. The jabot and the shirt with the frilled wrists seen in version 1 came from Hot Topic back in the day when it really WAS a goth store.

I later replaced the store-bought shirt with a shirt I did make myself - the button cuff with sleeve pleats seen in version 2. I drafted the pattern for this shirt in a CAD program, then tailored it to me and added in lots of styling elements. It was sewn from cotton sateen.

Because it's original, I'm often lazy about getting into it and kinda make it up as I go along. Sometimes I wear the jabot, sometimes open-chested with a pendant. Sometimes I wear small "Puritan" shoes, sometimes knee-high cavalier boots. How much of the youkai makeup I do is directly proportional to how much effort I feel like putting in at the time and what I have available. 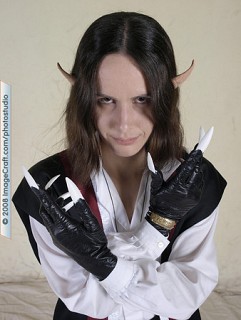 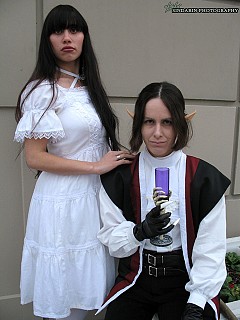 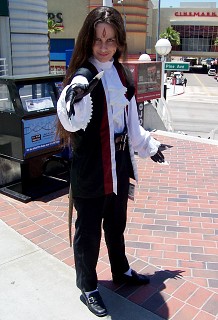 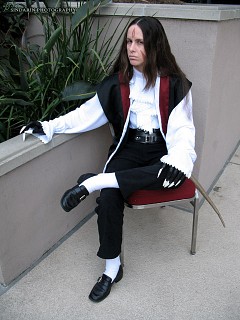 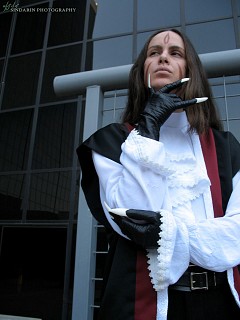