I made this costume to participate in a group of awesome people who also loved SaGa Frontier. For the longest time I really thought I was the only one!

I choose Rosemary based on the fact that I don't normally do cute characters and because I had ALOT of pink my my scrap bin I needed to get rid of. I really loved this choice because I got to learn a great deal about costume making. This was the first time I've ever drastically styled a wig, made a petticoat or shoes covers. I also learned about dying fabrics, hemming sheer fabrics and make-up.

I choose an older wig because I wanted to test out my styling skills before I went out and bought an expensive wig. I know now I can style relatively well... and because I hated hot thin this wig was in the back... I will be buying better wigs in the future. I also dyed the ends with FW Pink Ink; however it was metallic and I believe this is why the color had a hard time staying in very well. You can barely see it.

For the flower on her shirt, I wanted to make sure it looked water colored because I wanted essence of the original drawing to be in the outfit. If I had the money I would have taken white and sheer white fabric and dyed all of it to look like a water colored painting. I used Jacquard Dye-Na-Flow Fabric dye in order to make the flower and I zigzag stitched it to the shirt. I made the sheer skirt (which I realize is not accurate, but that's the fabric I had! T_T) and the petticoat to go under it. The petticoat under it used purple and pink tulle so that if was seen under the fabric or under the skirt, it would match the skem of the outfit. I also dyed the stockings at the knees.

The sock garders were made out of parts I scrapped from old suspenders. I had to use sharpie to color the elastic (The only part of the costume I felt cheap doing). I made the socks out of fleece because I was gonna be wearing this costume in cold weather. I am REALLY proud of my shoe covers. Originally the shoe had been a low-top canvas shoe . But I made it a high top and I made it pink. I used canva and I even made the lining on the inside have the same fabric as my headband. I had to seem rip those suckers and start over probably 7 times in total. But it was worth it. They looked fantastic.

As a kicker, Sae didn't tell me she was making a Thyme costume. So I literally came down for the shoot without knowing anything and freaked out when I walked up and realized what she had made! OMG! It was such a pleasant surprise. Prior to Youmacon this year (2009) I had never made a cosplay grouping with anyone. I'd been in groups but never in a brother sister type of group. Then this year I had another Robbie and a Brother to my SaGa character! What else could a girl ask for. 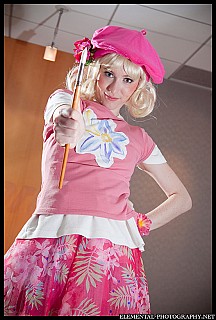 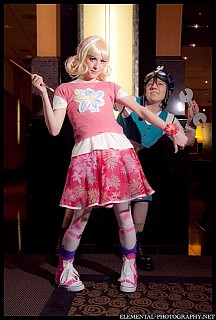 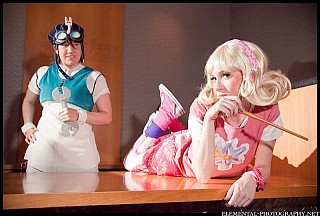 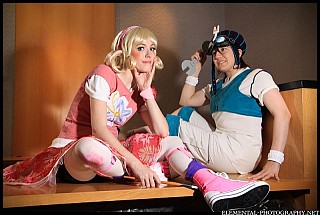 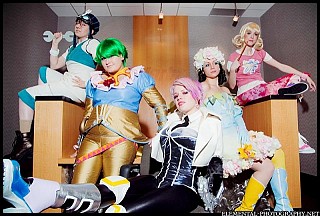 MikaChan So cute :3 It's also nice to see a whole SaGa group =D

Liliana UWAAAH! So cute!! Your costume is adorable!! Cheers for Saga Frontier! ^^

Hopie ADORABLE! I love that you did this costume, it's so cute! Yay Saga Frontier love!