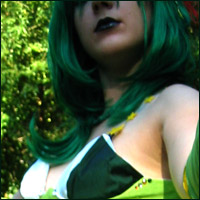 This all started upon seeing photos of Isadora's Elly and Fei costumes. I was so excited to see someone cosplaying from Xenogears in Germany where the game was never released. I told her I would do Miang and while I ended up cosplaying as Tolone, I think that was the start for the large group we had at Connichi 2009.

I changed my plans from Miang to Tolone because we already had three of the Elements and a complete group would just be too awesome. We decided to be as uniform as possible by choosing materials like pleather and lycra. The stones the Elements, Elly and Miang wear at the neck were all cast in resin by our "new" Miang Kukkii-san.
Most surprisingly some people didn't realize we were a group even though we totally wear uniforms. Very colourful uniforms. 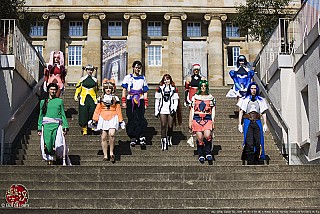 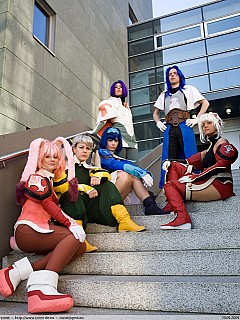