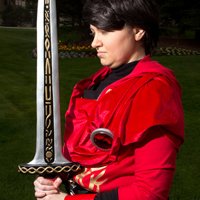 So...I made this. And I'm still not sure if it was a brilliant idea or a really dumb one.

All of the armor is made of cardboard and papier-maché, which was covered with gesso, then sanded, filled in with spackle to smooth it out and then sanded some more before priming, spray painting, and then clear-coating. Initial construction of this started in the late summer/early fall of 2013, then I didn't do much of anything over the winter before picking it up again in late March and going full speed ahead until virtually the eleventh hour prior to Anime Central. Losing my job in April ended up being a blessing in disguise, because otherwise I don't think I would've finished this in time.

But a word of advice: Don't make an entire set of armor out of these materials. You'll regret it. Because I sure did. It's terribly heavy, difficult to move around in, and you're going to melt in any weather warmer than about 60-65 degrees (the temperature during ACen). It was about 80+ in these photos I took, and I was miserable. There were also a lot of design flaws here, mostly because I wasn't expecting it to be so heavy; the shoulders sit pretty badly on the base parts, for one. The left one actually fell off at ACen and suffered a fair bit of damage that I had to repair ahead of these photos. In addition, the hip/waist pieces were constantly sagging around my butt both at ACen and in this shoot. Part of that is because I probably made the side pieces a bit too big, and part of it is because I started working out at the beginning of the year and lost about 10-15 pounds and a pants size in that time, so what I first constructed was built with my heavier figure in mind. The foot pieces (which were just sitting over regular shoes) were kind of a disaster too. The back "spurs" got damaged before I even hit the convention floor (one even before I finished everything! x_x), and the entire thing left bruises at the top of my ankles after only wearing the armor for about two hours.

There is a helmet to this too, by the way, but an initial test run of everything revealed that it didn't fit right on my head. Kinda easy to see why when you look at how the chest pieces sit on me, yes? It makes me look like I have no neck, and my makeup kept rubbing off on that front piece. It was kind of a bummer that I couldn't use it at all, but there's plenty of official art and some OAV scenes of the boys without their helmets on, so it's not like going without it was a huge loss. Plenty of people recognised what I was doing anyway, and it would've messed up my wig anyway, which I spent a lot of time cutting and styling to get right.

The bow is something I'm particularly proud of no matter what. I made that entirely out of styrofoam, cutting and shaping the pieces by hand before putting it all together into one piece. (It doesn't fold up like the one in the show, though--that's a bit beyond my level of expertise.) It's also something I can use with street clothes cosplays, and I've gotten a number of compliments on it at both ACen and at Kitsune Kon in March, when I had it with one of my street clothes outfits (although no one there aside from my friends knew what I was from). Unfortunately, it's starting to show its wear as well; I initially hand-painted it with acrylics because it was still too cold to spray paint out in the garage prior to Kitsune Kon, but then ahead of ACen I spray painted it to match the gold I used for the armor. But as the weather got warmer and more humid, the paint and Mod Podge I initially used started to bubble up off the foam in some places. It's something I can easily hide in photos thanks to Photoshop, but the fact that it's happening still bugs me. (The arrow is just a wooden dowel with the tip and fletching made out of craft foam. I didn't have it with me during conventions because of uncertainty on prop weapon rules, but at least I was able to show it off here. It's probably a bit too big, though.)

As I already mentioned, just two hours of wear at ACen left a lot of the armor in pretty bad shape and falling apart, and I had to spend a lot of time fixing things up enough for these photos here. Because of that and all the other issues I've had with it, unless I rebuild a lot of this from lighter/better materials, this will never see another convention, and I may never wear it again at all. I hate that that's the case, because I put so much time and effort into it, but it's all part of the learning experience. And goodness knows I learned a LOT here, because this was my first real "big" cosplay project of any kind.

On the plus side, this costume did get quite a bit of appreciation at ACen! It was nice to see so many people who still remember Ronin Warriors/Samurai Troopers after all these years, and it made all that suffering worth it. I just wish I could find more of the photos that were taken of me there before things fell apart on me. I've scoured the internet and have only been able to find ONE photo of me from the convention, and it's not really at the best angle, forcing me to take my own photos. 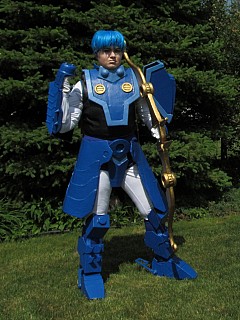 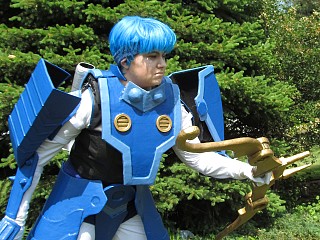 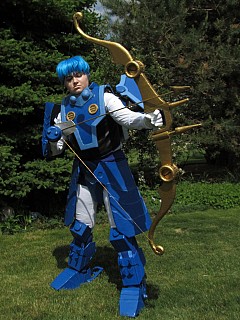 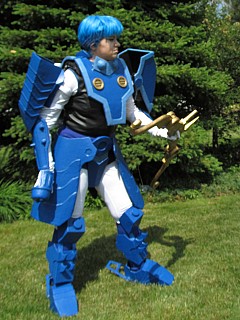 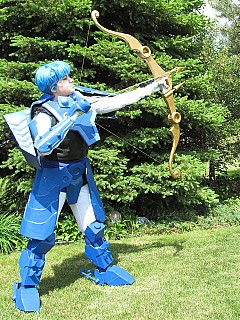 Senkaiguu I remember seeing you. I was the Lucina who took your picture.

psugorilla This is really cool. I LOVED Ronin Warriors as a kid. I do have a suggestion for you. From your pictures it looks like the torso armor is riding up on you in the front a bit. Maybe add some straps around the sides attached to both pieces of armor? It would help keep it down off the front of your neck

Asmaria This is really cool! *_* Don't be so hard on yourself, it looks great!

princemercury1 I think I saw you ACEN this year and you look incredible!! At first I thought you were from Fire Emblem, until I read your description. Have you thought about using EVA foam?