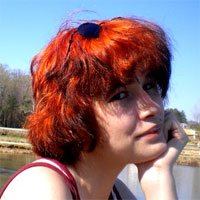 This costume has been a labor of love for me, I psyched myself out of it last year, so it's been in production on and off since Summer 2010.

Turned out to not be as daunting a task as I envisioned. Huh.

I started with a short black wig which I had in my arsenal and bought a bright red weave pack that I then cut and sewed onto a hair comb to form her iconic red streak. I made it removable so that I could take it out and use the wig for other costumes. (It's been used in my classic Dick and my rule 63 Jason Todd as well as Jubilee.)

The bodysuit I had drafted a pattern out of craftfoam to get all the interlocking pieces. The suit itself made of five different spandex colors and black bias tape. The lighter green actually started out a bright lime green and so I softened it out with a light green dye. Got lucky there I think. In the back she has a diamond made of the two greens with her zipper going up the back, that was a bit difficult but I managed it with another pattern.

The buttons were made out of yellow sculpy and then painted, they have a pin built into the back to make them removable as well.

The under gloves are a light green sleeve that I didn't even bother making real gloves, they're more arm warmers than anything. I then made 16 dark green squares which I hand sewed onto the sleeve and followd it with a stretchy black bias tape to help hold them in place. The black over gloves are made of a cheap party city glove leather. I actually bought one set of the Dark Knight gloves to use for the upper part since they were as oversized on me as I wanted. Then I sewed them onto the glove part of a pair of Anikin Skywalker gloves. They were purposely made oversized because hers are randomly HUGE. Seriously who fights crime light that?

The hip guards were the fun part. I took two sheets of craft foam and then measured out six arrowed pieces, four of one size for the sides, and two of a larger size for the center. I used the foam as a pattern to cut the same red-orange spandex as the top was made of. I then sewed them into sleeves that I could slip the craf foam into tco give it the right stiff shape. I then sewed the tops closed. I covered the edges in yellow doublesided bias tape and sewed it down. I was worried about the craft form so I used single fold yellow bias for the detailing and attached them down with fabritac. It was actually an interesting layering process. I didn't have time to attach the snaps to keep it attached to the bodysuit and I was afraid it wouldn't hold so they're currently attached with safety pins. I am best at costumes.

The boots were made with a platform sandal (I know right? Who makes platform sandals anymore?) that I cut the thong part off of and then I made a a sock that goes to mid-calf of the light green and then made another pattern for the zigzags off her upper boots. I then cut and sewed very slowly the two greens to form the upper part of her boots. The tops were made with the same leather as my cape and then I painted on yellow stripes. I also have black bias tape that goes down to the knee and then two more that go from knee to the toe. I then used a stronger adhesive (I can't recall at the moment it took so many tries and so many different things to get this to work.) to attach my now really long sock to the platform. The I edged it in black and yellow bias tape.

The shinguards were difficult to do and actually ended up too small. They're the same leather as the cape and patterned with yellow paint. since they were too small there's currently black satin that runs down the front where the closures are. I plan on remaking them in the future.

The cape is leather I got from Joann's and a yellow cotton. I colored the tips of the yellow black with fabric markers because Robin's a sparrow. The cape it shaped like bird wings and I picked the leather because I felt it would hold the shape of that the best. It attached around my neck with hidden hook and eyes.

The mask is a craft foam cutout soaked in plastidip. My friend Nadders gave me the idea and made the first one for me. It's attached with fashion tape because it's easier to take on and off through out the day.

The staff is PVC with two rounded endcaps that I sanded down so you couldn't see the writing anymore and spray painted green. I was in such a hurry by then that I smugged the paint all over because all of the bracers I used to have got lost in one of Dad's many moves.

And that is my Ame Comi Robin. First time drafting a pattern free hand and only my second time working with spandex. I think it turned out awesomely. 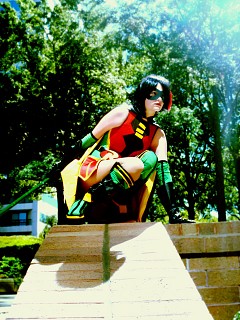 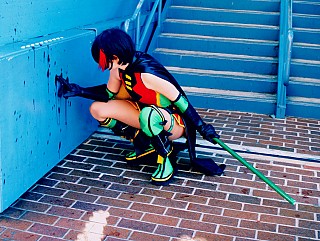 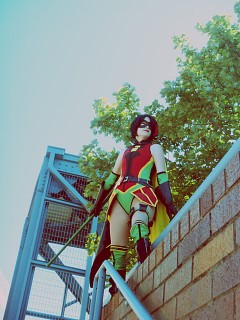 Idiod Wonderful cosplay. The ame-comi figures are great, I want to cosplay Jade.

Vastrosity Looks great! One of my favorites of the Ame-Comi figures, and you did all the crisp colors and lines perfectly.