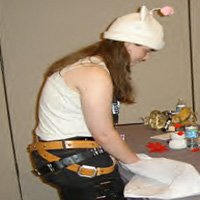 I already had the blue jeans and some boots from an old cosplay. Later, I may upgrade to more accurate boots, but for now, they work.
I found a wig fairly close, fit to a shade of blonde that would look better on me. I did some minor styling/trimming and it cost me around $40.
The undershirts are a plain black (tank or tee, I haven't decided due to the weather) and a grey polo I borrowed for the weekend from family.
The most difficult part I think everyone has is the jacket. I started by looking up M65 Field Jackets on Ebay, found one that almost exactly matched my measurements for $20, and bought it.
The patches are something I could have purchased (for $40 a set) but I'd rather save the money and do it myself. Unable to find fabric sheets (for printers) in my current area, my wife picked up some plain felt. I trimmed it to paper size and printed the designs. References and designs were borrowed from The Silent Hill Office of Tourism website. I looked at the in-game model and the official jacket to try for accurate placement.
After cutting out the felt patches I sewed them on by hand. I would say the front ones took me about an 45 minutes to an hour and the shoulder ones took twice as long due to difficulty. I like adding that own touch to my costumes so I didn't mind, although my fingers were a little sore. I would reccomend using some kind of sewing tape or thimbles on the fingertips. ^^; I am not an expert sew-er but I think it turned out really good.
One thing I decided to do differently was the East End / Frontier patches. Some places say James' doesn't have a pocket here, which could explain why the patches are stacked. The official jacket has them on the flap and pocket. I decided to combine these ideas and turned the Frontier patch into a pocket where the flap could tuck in. It turned out very well! :)
Lastly, for props, I have a map of the convention's hotel, photoshopped / trimmed the edges to make it look faded.
I found a similar flashlight for around $8 on Ebay. In the future, I'd like to make a more accurate one. 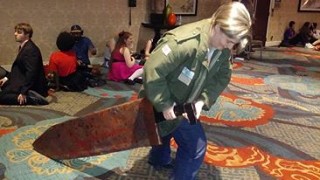