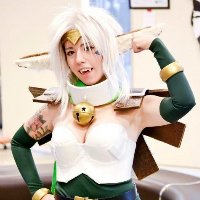 Since the beginning of the series Gaara has been the character I have been able to identify most with. We have both had a rough past, shunned others, and were drowning in our own hatred until we met people who pulled us from the depths. Not only does his story captivate me, but the design of his character. I just had to start cosplaying him.

This cosplay was not as challenging as my previous cosplays but has become one of my favourites to wear.

The hair is my natural hairstyle and how I wear it normally, including the dye-job. For Gaara I ended up shaving off my eyebrows since I did not like the look of make-up over eyebrows. I'm not too heartbroken. "Love" kanji and make-up done by me.

Honestly, I do not remember the fabric for the coat. It was a last minute by since I made this new coat in 5 hours before the con. I just went with a thicker fabric that was the proper colour. I made the pattern myself out of an old coat which I ended up not liking because the colour was too off. The vest is made from a grey suiting material to give it a little bit of a classier feeling. All the belts and straps are made from the same material. Pants were purchased along with the ninja shoes.

The gourd was by far the most time consuming piece of this project, though it was very simple. The base is two bouncy balls, such as the kind you would get at Target for a few dollars, duct-taped together and paper mached. I used the flour method for the smoothest look I could get while still being cost effective. I then mixed a colour and painted it about five times, hand measured and painted on the seals, and then added the cracks. It was coated in spray enamel to give it a shine and also to help protect it. The cork and ring around the top are made from foam, such as what you would get in the floral arrangement section at a craft store. 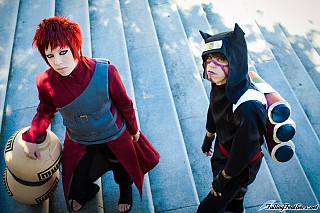 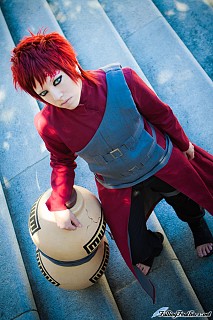 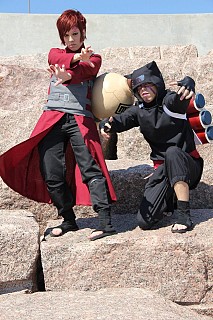 Gummibar I love that you used your hair for this, it's a nice, natural color and photographs great with the costume. I love the realistic look of the costume itself and fabric choices. One of my favorite Gaara's, keep up the good work! <3