"Although I cannot fight, I can at least continue to read."
Komui Lee, supervisor of the Black Order (D.Gray-man, Chapter 38 page 1)

Heya, guys,
Komui’s back and this time in 2nd uniform :)

I already wrote in the description of my 1st uniform, why I love this guy and what fun it is in general to cosplay him.

But why did I have to make his 2nd uniform as well? Good good question if I look back now… ^^’’
Since this thingy like all the 2nd uniforms of D.Gray-man became a real challenge and pain in the ass in the end -.-‘’. Never underestimate cosplays again xD! Well, at first everything was fine when my real sis and my sis in cosplay helped me to sew the basic pattern. But then it was my turn first to trace the outlines and letters of his cross (since I believe it isn’t made of metal in this version anymore) from a picture in the anime which took about 2 hours o.O to be able to print it nicely and iron it on the uniform. Afterwards I sewed by hand all the stripes and crosses of pleather and stuff on the raw coat… which took me about a week of constant sewing o.O’’

But still I believe it was utterly worth it :). Just had to make this version too cause I love some moments he experiences in these clothes. Most of all the epic scenes with Lenalee when the HQ is under attack but also the funny little zombie arc ;). Besides this version is very rare, I believe o.O, but I guess I know why now xD.

PS: I wasn’t able to finish my slippers version 3.0 for Animuc 11… as his shoes try to mock me.. first time the colour I used bleeded out… second time the glued little squares came off… But as with the Komurins: There will always be a next version! Next time I will wear them again.

Outtakes:
Never -I insist! never- feed KatekyoHitman Reborn! Chars (which are actually Noahs in disguise o.O) with Komuvitamin D ^^’’… It has interesting side effects but mostly leads to very strange ideas and an extreme hyperactivity! 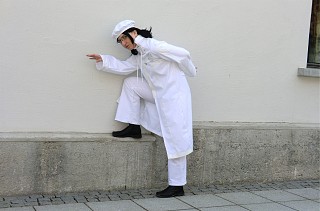 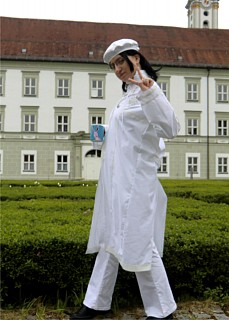