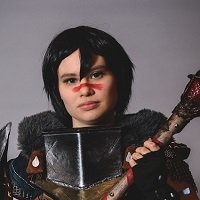 Late august I decided to join two friends and cosplay tsubasa, even though I had not yet watched it because she was cool. I did watch most of it before the convention and I've seen some of card captor. Anyway, one was my longtime friend so I wanted to do a matching cosplay. The other we'd met at a convention in July. They were Sakura and Sayoran and encourage me to be Tomoyo.

I had just moved away from home for collage and was not experience enough in the sewing apartment so I only sewed during the weekends I went home. And I was not that active at first. But I finished most two weeks before the convention and my last weekend home.

The necklace and head thingie I made by craft foam that I painted in four layers of gold paint. Yeah. I cut everything out and painted it while watching Doctor who. . .

The head thing have steel thread to keep em the way I want to. All is stuck to a diadem I have had for year and was perfect for this, had holes in it and all. ^^

The hair eight had a base of a elastic black fabric tube that I sewed on hair extensions. It took many tries until I realised that I should spray them with hairspray first. . .

Putting the necklace together took long time since the best purple stuff I could find was a little yarny and still to thick so I could only use two of the four strand and had to peel them apart and then use a threader to pull them through the beads. 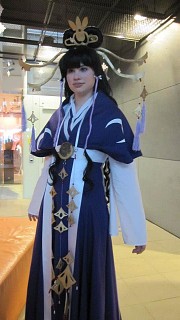 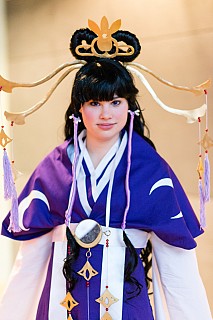