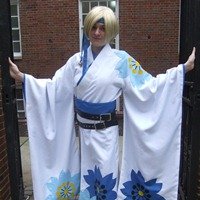 This cosplay is a dream come true. Ever since seeing this outfit in the artbook and in the manga, I've wanted to cosplay Ch 100 Fai. I've always wanted a kimono since I was little and my favorite colors are blue and white, plus Fai being my favorite character was a plus.

This outfit was suppose to be debuted during the Sakura Matsuri '11 with my wonderful cosplay group as Sakura, Syaoran, and Kuro-pon. However, our cosplays did not come in on time so they'll be worn next Sakura Matsuri. I've been dreaming about wearing the Ch 100 outfits at during the Cherry Blossoms for well over a year now, but just having the outfit now makes me smile.

The outfit was commissioned but I commissioned it from a person that had never made it before. They had only made Sakura's and I had ordered from them before so I knew their work. Sakura, Syaoran's, and Fai's were all commissioned together. I wish I could sew and say I made them myself but I think something can be said for picking out the right person and telling them the details you want to be done as well.

The outfit is one long kimono. The sleeves are like monsters. They're sooo long. Underneath the kimono is a pair of white pants with buttons on the bottom. A sash is used to hold the kimono in place and two belts for Fai's weird gun obsession in this picture. Who gives Fai a gun anyway, let alone two? The headband is a little annoying at times because it likes to slide down but overall I'm very very pleased with the outcome! 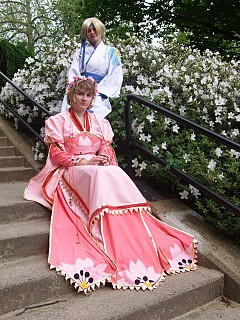 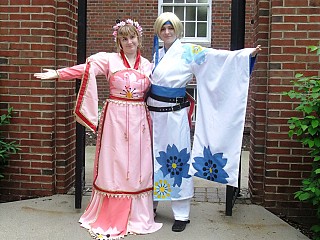 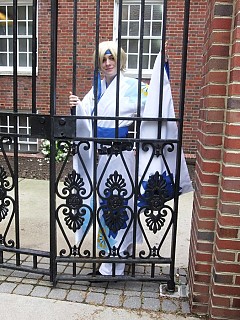 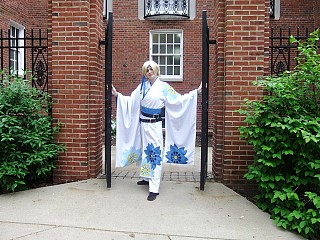 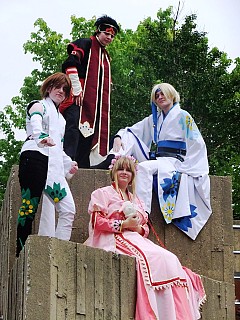 benihime Clamp seems to have a thing for really long kimono sleeves :( you make a really cute fai :)