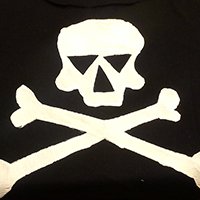 I wanted to do an Overwatch cosplay along with a new friend of mine but also wanted to do something smaller scale to save money and have time to focus on other things going on in my life at the time. I've wanted to cosplay Mei since she was announced back in OW's beta though so luckily her Summer Games Table Tennis spray fit the bill.

Since I was looking for something easier a lot of this cosplay is direct from the stores/Amazon with little alteration since not much was needed.

The wig is a 23" Jeannie from Arda in Mahogany. Most guides recommended the darker browns from either Arda or Epic Cosplay but they were based on just her original concept art with much cooler tones. Looking at her hair in Rise and Shine it comes off a lot warmer than all the dark brown options looked, and in the summer my own brown hair tends to lighten, so I chose a warmer brown instead.
I didn't use the ponytail attachment and instead just used the short base ponytail with a bun donut. I felt the attachment just made it much too large. I mostly just cut the bangs and did minimal styling, only a little spiking on her bangs to make them more defined.

The shirt I found on Amazon, the shorts at a local thrift store. The shoes are also from Amazon and I painted what I believe is either Snowball or its face on the tongues. They're very small in the spray so it's hard to tell exactly what they're supposed to be. The glasses are just from Zenni.

The socks are also just from Amazon and I must say they were hell to find, and they're still not totally accurate. They came in a pack of 6 so since I had spares I did try just filling in one of the white stripes with a fabric marker to see if I liked the accuracy but I felt it was still too obvious it had been filled with marker so I ended up just using the original two-striped pattern. It did mean I have plenty of spare socks to change into throughout the day which can help with comfort at cons.

The paddle was also from Amazon and painted with acrylics then sealed for protection and a bit of a satin shine, plus it helped make the finish a little more consistent.

The hairpin I made using various online tutorials. It's mostly craft wood; a thin dowel for the length, some wooden discs for the end, and a wooden flat-bottomed sphere at the very end. Her table tennis look doesn't include the dangly ornament which makes sense since it's for sports (she's also not wearing her bracelet from what we can tell) which did make things easier.
I will say the hardest part of this whole outfit was probably tapering the end of the dowel rod by hand over the course of 3 days with various sandpapers. If I have to make it again for one of her other skins I'll likely just sacrifice an old paintbrush or something similar instead.

With this debuting at Sakuracon I'm a little worried about getting cold so I may add a blue tank top to the outfit, which would also double duty as part of other casual outfits if I ever do them. I'm also contemplating wearing tights/leggings depending on what the forecast looks like. Ultimately I expect it to be a pretty comfy cosplay though aside from the ponytail wig which I'm already worried about weight with. 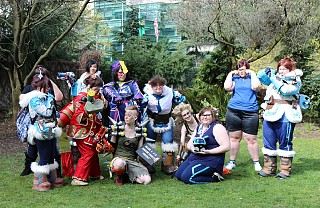 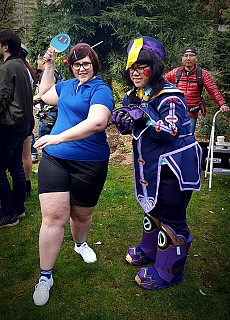 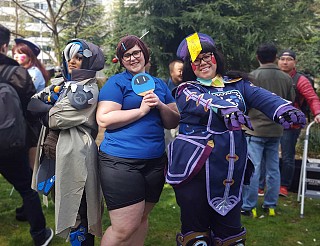 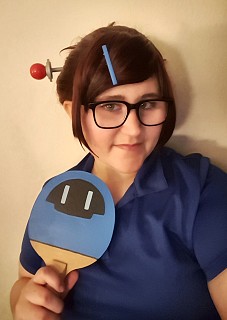