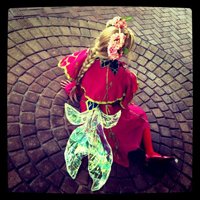 Wow, this outfit haha. You guys can thank Capcom for this because I was asked by them to try and make this outfit..which I did attempt.

The pants I was lucky to have had lying around since back in my high school days I thought it would be cool to wear them...and then never did...UNTIL NOW! :D
The shirt was Thrifted. However the details were made by me and added on. I was very very fortunate to have a red fabric of the same texture near in my fabric box.
Added onto the shirt.
- Extra buttons
-Collar & Belt
-Mini Back singer piece
The necklace I made with Fimo clay, I looked at photos before giving up and asking to figure out what it exactly was since it looks EXACTLy like some key of some sort but alas, it was not. So yes, the necklace was sculpted with a pin added and baked as directed before rub and buffing it with bronze metallic wax. and then SHAZAM! necklace a la mode.
Gloves I bought from ebay in their leathery-ness.
Belt with utility pouches I made from extra black pleather I had lying about. Luckily with a chain I had as well!!!:D
The Holster is her I assume mercenary version? It was the only reff photo out at the time. You know, the one with the crossbow? That one.
I made the holster from extra black pleather lying about.
The boots are regular black boots but the cuffs on them were made by me again with the same black pleather!
Combine all ingredients and PRESTO!
An Ada is ready to be worn hahaha. 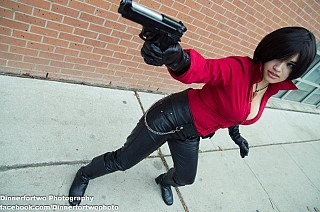 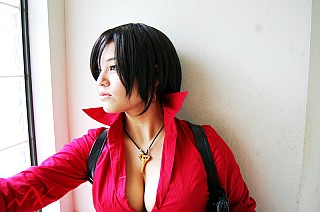