The second I saw her I decided to cosplay her. Couldn't get past that intricate outfit detailing and the like. This shall also provide me wit a significant challenge and being that I make everything from scratch I'll really have my work cut out for me xD

Wig - I decided not to dye it but to just keep it as it is. I did a little trimming to the bangs and used a hair curler accompanied with alot of spray paint for the curls in the front (:

neck straps - I used the same black fabric I used for the base for the part that goes around the neck and velvet for the long pieces that come down. Sewing on velvet isn't too fun but I was able to get both pieces together so that they'd look the same on both sides. I then went around them with white bias tape and detailed the bottom using the same stretch knit yellow that I've been using for this cosplay. Sewing those pieces together in a symmetrical matter wasn't easy but at least they got together which is good. At the top I used snaps to close the neck strap together and on the white pieces I used valcro on both sides.

top - Ok so this top was quiet a piece of work for me. I started with a slight stretch material that I used for the base of everything. I cut it in the shape of what would be like a swimsuit. I've never put anything like that together and of course I did it from scratch so there was alot of cutting and trimming. After I got it to a point of being semi fitted I proceeded to the minor detailing. The yellow strip coming down then red thin bias tape coming down the middle. The white ruffling at the front was also a thing that I threw together. I'm not that greaet at making ruffles but it came ok. The back has a thing that looks like a bow and with that I drew out the shape on the same yellow fabric I used in the front using a yellow sharpie. After I cut that out I sewed it on to the back.

Moving on to top piece I used the same material that was used for the pants. I made short sleeves and came around the edges with purple bias tape. I then proceeded to sew the back of it to the base and assemble the front with 2 snaps and a hook and eye for easy slipping on and off. The light purple piece of fabric containing the gem piece also snaps at the top and I just tuck the rest in. The gem I detailed with a sharpie and was glued on with hot glue. I will probably fill it in with something a little more perminant to ensure that there isn't any smudging or anything like that. Once again I have to keep in mind that I will be wearing all this in possibly 90+ degree weather o_o

The bottom pieces were done using the same fabric as the base. The base fabric surprisingly enough was a seasonal so I had to use a velvet for the ruffles at the bottom. The yellow pieces were done using the same technique as the back bow on the base. The biggest issue I had here was that I wasn't sure how I was gonna make the 2 pieces fan out because I can't use a petticoat on not only 2 separate pieces but to then make it so that its not visible. With that being said I kinda just went a bit basic with it. I sewed white bias tape to make little frill things at the bottom between the 2 pieces.

gloves - Unfortunately as I said above the base fabric for the top was a seasonal so because of that I had to switch gears to a velvet. At this point I officially hate velvet with all my hate but I manage to sew the gloves together and the detailing once again using that same technique and hot gluing the 2 gem pieces on while they were on my hand still o_o The yellow things were made from craft foam that I covered with bright yellow blanket bias tape and the white things that look like crowns were made with my left over white twill fabric and the black fabric from the base of the outfit and and black strip that goes around was black bias tape. Getting all those final details together was quiet the adventure, all I'm gonna say is thank god for fabric glue.

bottoms - made this portion as pants from scratch. Unfortunately the fabric is very unforgiving which made it extremely difficult to make it as fitted as I did but anyway. It has a working zipper and a hook and eye that closes at the top. I sewed on a garter piece on the left pant leg. I only sewed it at the top but thats not too bad considering it stays in place just fine.

boots - Boots, shoes whatever xD Anyway I found a spiffy looking pair at the thrift store originally white and spray painted them black. I used some more of the thick yellow bias tape I used for the arm pieces before. I glued them on with fabric glue to complete. Since I used regular spray paint I got worried about chipping and stuff so I actually used varnish on the shoes(probably not the best idea) to insure no chipping. 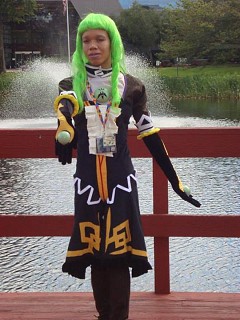 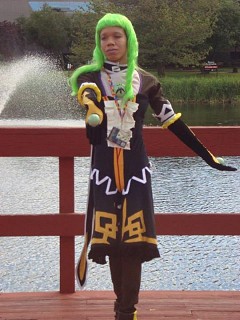 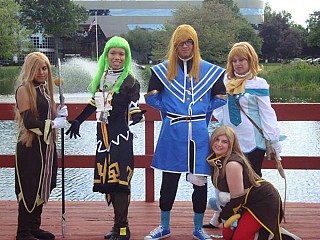 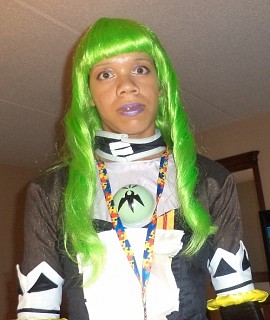 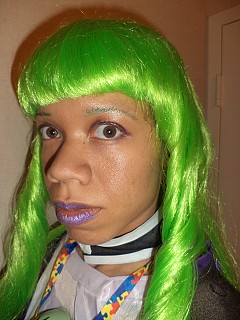 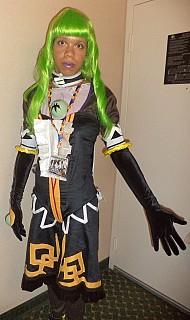 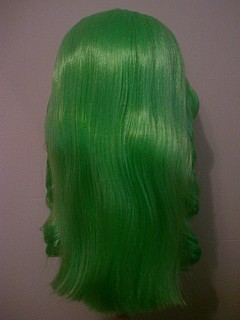 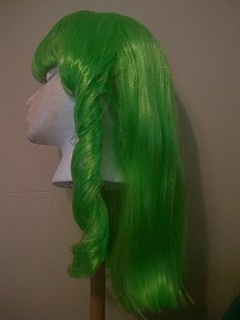 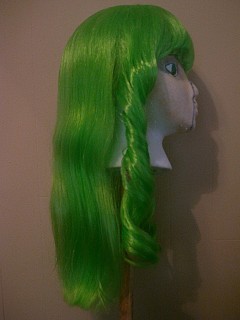 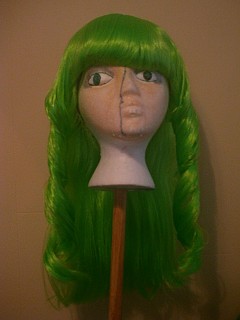 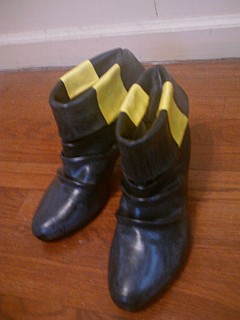 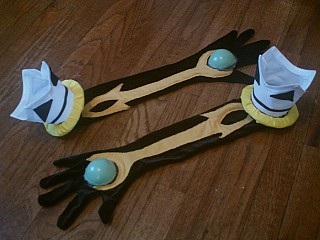 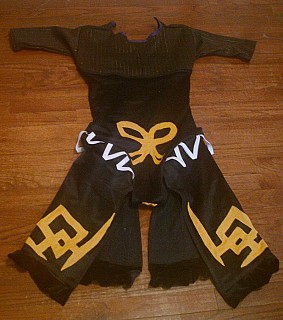 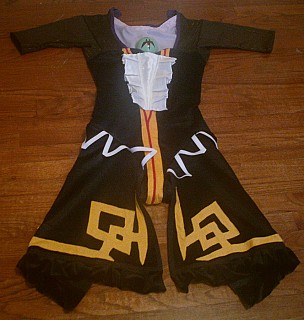 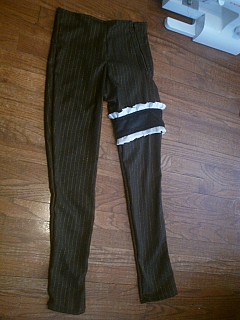 Otaku Gunso ahh ok, thanks for the heads up :D I haven't done anything with it yet but I'll definitely keep that all in mind :D

SharpieItBlack The only thing I have to say, be careful about the wig. You usually can't dye or style or do much with a halloween store wig. Unless it says so, it is plastic and won't be heat resistant and it'll melt if you use too much heat. You could cut and use styling but no heat. Just be careful is all! Good luck!