This costume took me much longer than it should have. The work was pread out over a couple of months, but really was a pretty simple costume.

The horns were the first thing I worked on. They are tinfoil filled with hot glue and then covered in model magic. They are covered in Gesso, Modge podge, and Acrylic paint.

The hood was next, It was mostly trial and error, but basically what I did was take cardstock and a wig head and try to cut it into the general shape. After that I traced the pattern on to the fabric and sewed it together. I filled it with stuffing and batting and added the appendages to the back. Buttons were found at Joann.
The shirt was originally yellow, I dyed it with orange dye, but it kind of came out after I washed it. I will try to dye it again before Anime Expo. The sun pattern was freehanded in yellow fabric paint.

The pants are meant to be orange, but I couldn't find a better color before the con. I'm going to look for white pants next and dye them orange.

The wings are made of wire with blue wrapping paper glued onto them and then ironed down. Acrylic paint was used for the patterns.

The boots are a nightmare... I couldn't find anything close enough and I tried making boot covers, but they didn't turn out right. So I got these on sale and painted them.

Glasses were found a savers and Wig was bought from Cosplaydna. I sheds like crazy. The body paint is Ben Nye brand creme. 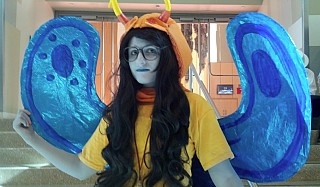 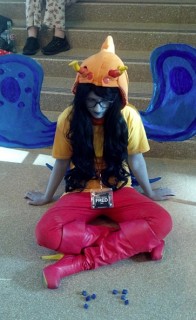 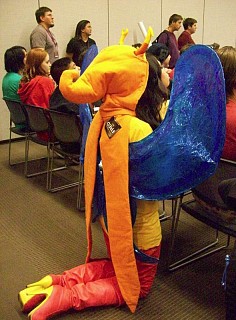