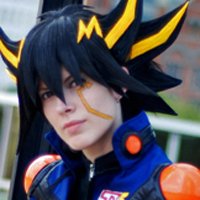 A bunch of my friends are into Kuroshitsuji, and I had decided to marathon the anime this last semester. I've been meaning to read the manga too but just haven't had the time or money to invest in it. I decided Finny was my favorite, and lucky for me it's also a really easy and cheap cosplay to put together.

My friends decided on doing a Kuroshitsuji group for A-kon 2011, and I wanted to join in but didn't know if I could pull it off since I was already so busy with other projects. I decided to sacrifice the time I would spend styling my new Yusei wig and work on Finny instead as a surprise for my Ciel.

The wig was something I already had on-hand. I originally got it a long time ago for a Durarara group (I wanted to be Kida) but it never happened XDD. It's not the ideal wig for Finny, but I wasn't being picky. I got it for cheap on Peri-hair.com and styled it in about an hour in our hotel room at the con. Hairpins were just painted red with acrylic paint and sealed with nail polish. I might get some thicker hair clips later if I get the chance to cosplay Finny again in the future.

I made the shirt out of white till with a pajama shirt pattern as a base. Just cut a slit down the front and finished all the edges with red bias tape. I already had all the materials for this on-hand, so it was no cost for me. :3

The pants took longer to make than anything else. I bought a yellow ponte knit material for the base (used pattern McCall's 5391), but I had to paint all the lines by hand.

Brown belt pouch was made without a pattern out of brown vinyl. It was super handy because I could carry stuff in it! XD This was another part of the costume that I already had all the materials for on-hand :3

Gloves were $1, the hat was on clearance for $3 at Wal-mart (thankies to Liz for such a good find!), socks were also from wal-mart, and the boots were $12 rain boots that I quickly modified with red duct tape along the top and bottom. I want to switch out the duct tape for something different later, but again I wasn't picky at the time. XD All I did to the hat was add string with an adjuster made out of craft foam (isn't functional; just hot-glued in place) and glued on piece of red blanket binding for the ribbon (had it leftover from another cosplay, whoo-hoo!) 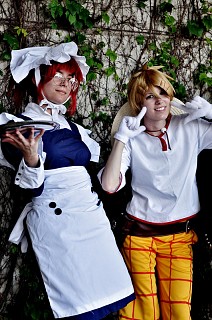