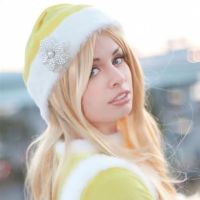 Oh my gosh, there is so much to say about this costume. Basically this costume has been the hardest costume I have made to date. It took me 18 months to make this while I was living in Japan. The majority of the delay in making this is probably due to not knowing where to find the materials and then not expecting how expensive it would be. Overall this costume cost me about $500 ignoring the currency exchange rate. Also, my seam ripper was about as important as my sewing machine with this project. I ripped seams as often as I sewed them together. It was a little maddening at times.

Wings: Easiest part because I chose not to make them! I commissioned this from fancy-fairy . com. They have a dA, website, and facebook page. I recommend the FB page.

Wig: I used two wigs and a ponytail extension from Cyperous wigs. I happened to be at their showroom and was able to play around with the wigs in person. I used a base wig and made a ponytail stub for the first time. I googled a tutorial and ended up with one here on coscom. Clearly it worked. On top of the stub is a styrofoam ball with the center carved out and completely covered in felt. I cut my ponytail extension free of its clip and elastic band and the curly wig free of its bangs and glued those onto the foam covering the ball. I set the ball in a cardboard tape ring that I covered with fabric and a fabric feather. The whole thing sits on top of the ponytail stub. (The stub is massive and I don't want to accidentally mess up all my hard work making the ponytail with a clip or a comb that could just pull everything out of place.) It doesn't really need a clip anyway. The poofy bangs were a challenge too. Ironically I didn't have enough hair for the bangs but that was entirely my own fault and not the fault of the wig since it had PLENTLY of hair but it was already too late for that so I worked with what I had. The lack of hair meant that the poof couldn't really support how big I wanted it to be so I improvised and glue some supporting felt to the hair underneath and when I wear it, I pin the felt piece in place. It also helps to keep the scratchy teased hair off my forehead which is a bonus. I've never really heavily styled a wig before so I'm really proud of the job I did with this wig. I'm also really happy with how I cut the bangs too. I watched my hair stylists at the salons like a hawk (to a point where I think I made them a little uncomfortable) to see how they made things not look awful.

Shirt: My vision for the costume was different from what I had seen other cosplayers do before and what I had seen the folks at Disney do for the face characters. I based my patterning off of a specific promotional image that I liked better than the stills from the films. The "leaf" veins had a more flattering placement on Vidia's body and it also looked like a bigger challenge, so I went with that. I also didn't want to paint the leaf details onto the fabric because I wanted the 3-dimensional effect so I decided early on to sew in piping for the veins instead of painting it on. So basically, I took a tight-fitting shirt and drew lines on it then cut it up and made that my pattern. Yep, I'm super professional. Unfortunately I had to make the shirt twice. The first time I realized that normal cotton piping wasn't going to work very well with the velour I had purchased because velour stretches and well, cotton piping doesn't. So after making the entire front of the shirt, I decided to start over and make my own piping out of elastic and spandex and paint it the color I wanted. Getting both sides of the front of the shirt to match was the biggest pain in the butt I've ever dealt with. I've never had to be so extremely precise with my sewing before and I did my very best to make the sides match. I sewed the pattern piece onto the fabric and then traced the stitching on both sides so that I could get the piping as correctly placed as possible. It sucked. But the results are really nice. After the outfit was assembled, I painted a gradient onto the velour. I used a couple of different pinks to get the color I saw on the picture because the purple in the velour was too dark but I did see that the color near the veins was darker than the rest of the costume. I used Pebeo's Setacolor opaque fabric paints for all of the painting I had to do on this costume, piping included.

Pants: Continuing with 3D vein and piping plan, I traced lines onto pants. Unfortunately I had to make the pants I was planning to cut apart. I had never made tight-fitting pants/leggings before either. I had my parents send me spandex for my birthday (cause finding it in the local fabric store in Japan doesn't happen) and made some leggings and drew on them and cut them apart again. The remaining spandex was used to make the elastic piping. Basic assembly of the pants was the same as the shirt and took less time because I kind of knew what I was doing at that point. (However I will say this, the curved area on the front of the pants was a GIANT b***ch to sew! )

Leaf/Feathers: 2nd easiest part of the costume. I found nice fluttery fabric (I honestly have no idea what it was cause I couldn't read the Japanese.) and it had interfacing glue on one side. I took bendable plastic wire and sandwiched it in the fabric and ironed it. I cut out the leaf shape and cut the sides and painted the rest of the detail. All of the leaves are sewn onto a piece of ribbon that snaps around my waist. (I gotta work some kinks out of this part of the outfit still cause it doesn't interact with the rest of the costume in a way that I like.)

Shoes: Got really lucky and found velvet flats at a discount shoe store. So I just took off the embellishments and painted the shoes with the Setacolor.

Okay. That's everything! (I think.) 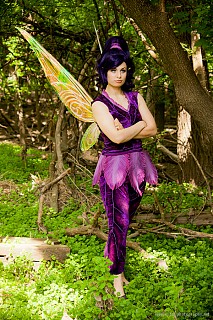 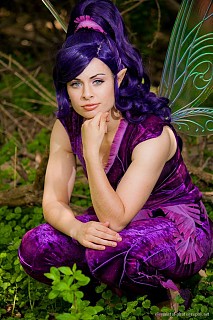 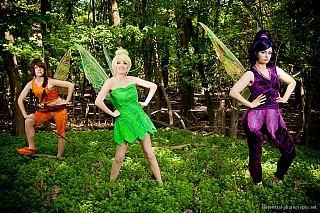 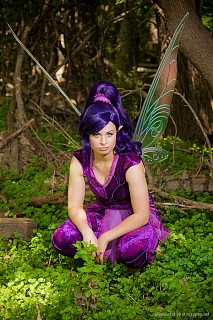 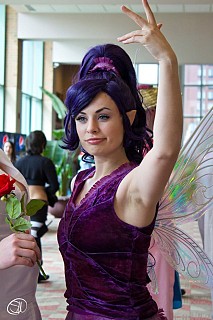 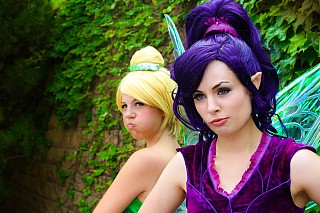 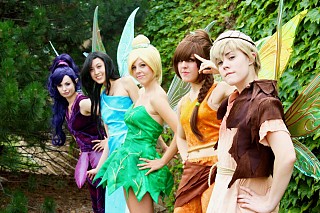 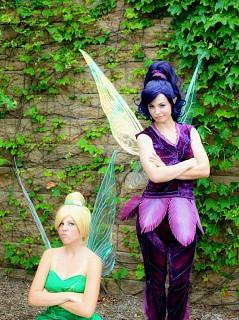 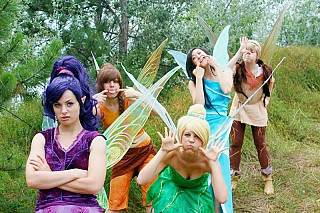 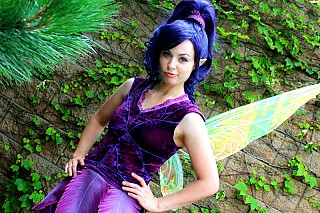 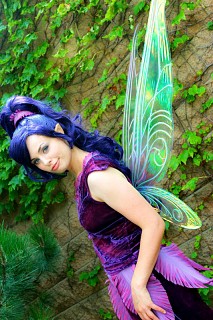 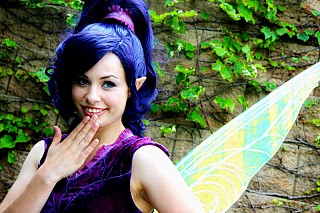 YuriHappiny This is FANTASTIC! and I love reading how you did everything!

PosiTori Wow! You can see all the detail and hard work that went into this costume. It's beautifully done and you look amazing!