As soon as I heard about Resident Evil 6, I was eager to find a character to Cosplay. The trailer for the game came a little out of the blue. I don't think anyone expected a new canonical Resident Evil game for 2012. I was pleasantly surprised by the cast list for the game. I was thrilled to hear that they were bringing Sherry back. I pretty much instantly fell in love with Sherry's Edonia outfit. Her coat looked really sleek and pretty. I knew right away that I wanted to Cosplay it, but patterning out complicated designs is definitely not my forte so right off the bat I was thinking about commissioning my friend Ammie to make my coat. She's made me a number of Sailor Scout fukus and my Nurse Lolita Rebecca costume in 2011 so I knew she was interested in taking on unique commissions. In the summer I asked Ammie about the commission and she was eager to accept. We decided to set the commission for Youmacon so there would be time to get it done after the game came out (and that way Ammie could confirm the coat design with the in-game figure models). I started looking for the other costume pieces in the summer. The construction time for this costume doesn't really take into consideration all the countless hours I spent searching for costume pieces on eBay (and arguing with a seller about my boots which I'll explain later).

Pretty much all of Sherry's Edonia outfit was easy to find clothing. I purchased the ribbed knit turtleneck on eBay in early September. I also bought brown leather gloves and grey knee high socks on eBay. I purchased the pants (which I guess could be classified as jeggings) from Urban Planet. They were super long on me (the perils of being petite) so I cut and hemmed them. I bought a wig for Sherry way back in late June. It was a fairly cheap wig (and not the best quality) but it had the right style elements that I wanted for Sherry (namely it had lots of curls and layers in the back) and it worked out really nicely in the end for the character.

The boots turned out to be a huge headache. I searched around online for a couple of months before I decided order a pair through eBay in late August. I had two months to spare before Youmacon so I had lots of time for them to arrive. Turns out that the eBay store was being managed by incompetent people and the boots were shipped to a random address in New Brunswick (I live in Toronto). After I realized the issue, I contacted the seller in early October and eventually the seller shipped out another pair after apologizing and reconfirming the address. Again, the boots somehow ended up in New Brunswick in another city. At this point I had less than two weeks to get new ones. I filed a claim with Paypal and the seller refunded my money after finally admitting to their mess-up (and refusing to send another pair using express shipping so I could get them in time). The whole situation was really frustrating, but my awesome friends gave me lots of suggestions of places to look for replacement boots. In the end Ammie suggested a pair of boots from an American eBay seller and I asked if our friend Jay (who lives in Michigan) could order them for me so I could get them in time for the con. He was able to and the boots arrived on the Monday before Youmacon. I was really grateful for Ammie and Jay's help. Ironically, the new boots are actually a style called "Becky" which is hilarious given I was called Becky as a child. XD

I picked up my coat for Sherry and the boots at Youmacon. Ammie also made me a scarf to complete the look. I absolutely love how my coat turned out! It looks like it came straight out of the game and it's such a flattering cut! Ammie said she used over 50 pattern pieces to compose the jacket and I can't be happier with her work. She's wonderful to commission. It's taken a real load off of my mind that for some of the more complicated character designs that I want to Cosplay, that I can rely on her to make my dreams a reality.

At Youmacon Ammie and The Letter Jay joined me in Cosplaying from RE6 by Cosplaying Ada and Jake respectively. Jay made Jake's matching Edonia outfit so it was cool to have a partner to Cosplay with. Jay even cut his hair really short to portray Jake. I really admire his dedication! We did a paid shoot with Elemental on Saturday night of the con and had a blast posing together. It's always fun to Cosplay with Ammie and Jay.

It's hard to pick a favourite Resident Evil costume now that I've Cosplayed so many characters from the franchise, but I have to say that my Edonia Sherry costume has to be one of my top favourites. It's nice to have a winter appropriate costume and I'm looking forward to getting pictures of this costume in the snow. I love that Sherry grew up into such an awesome character. It's nice that the game developers are finally providing some information on some of the characters that we all feared were long forgotten. Plus, I found Jake and Sherry's campaign in 6 to be one of the most fun campaigns in the game. (^_^) 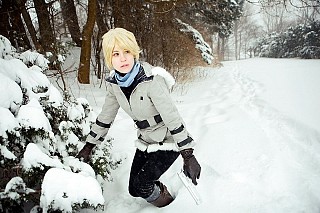 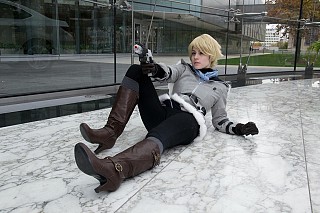 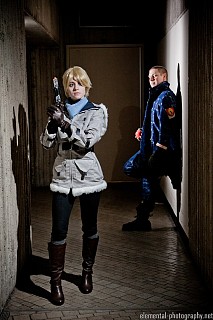