This costume was mostly found item. I found the jacket at an antique mall in the middle of Missouri and the skirt I found in a thrift shop in Vegas. I literally made this costume while I was on the road this summer, so I couldn't really sew much. The body stocking was bought on sale at Spencers and I bought a stick on bra to cover my nipples (since she technically runs around in this outfit without anything on under the jacket or the fish nets.

I found the coolest slap bracelets at a $1 store and I found the colorful bangles at a shop on the 3rd Street Prominade in Santa Monica. I had pedicure and had them paint my nails rainbow colors. It was funny to see their face when I made the request. My contacts were bought from YouKnowIt.com. The blue was Funky Eyes Blue UV Contact and the green was Funky Eyes Green UV Contact. The fish on my necklace was bought in Flagstaff Arizona and is a luck fish. It's supposed to bring me luck in my finances. I guess, since I found all this costume for pretty cheap all in time for San Diego Comic Con, it kinda did.

The pride and joy of this costume, and while I didn't spend as much in sewing it, was the wig. I used one Luthien Wig in Pumpkin 1002F and one Curly Clip, that I straighted, in Pumpkin 1002F.

I really wanted to make my hair look like I was under water. I bought copper wire from Micheal's to make the base of the hair going up. I then sewed some orangeish felt to the base of the wire that would go on my head and then I sewed the wire into the wig. I then took parts of the Luthien and started to swirl it up around the base, trying to use the hair to first cover the wire and then start to make wall around the wire. In the future, I think I would use some felt under the hair to help keep the hair in place better. I could also then use some glue to make it more stable.

With the hair that was left and some of a straightened curly slip, I started to make the swirly parts. I thought this would also help with the under water look. I almost wish I would have had more hair to work with, however Arda was currently out of anymore clip in extensions. Maybe in the future. I then bought string that was close to the same color of my hair and then threaded it though a ton of fish. I bought the first at a $1 store. I then used the wire base to connect the fish to my hair. And to top it off I added a ton of Got2Be, because its a God Send. BUT OMG DO I FEEL BAD FOR VEGAS! I had such a hard time finding some in Vegas. They are missing out. 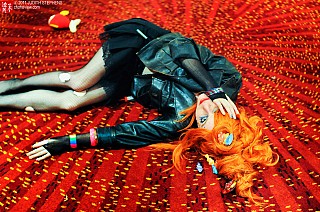 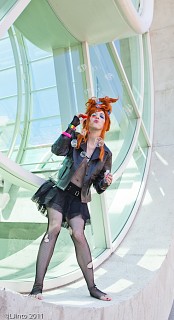 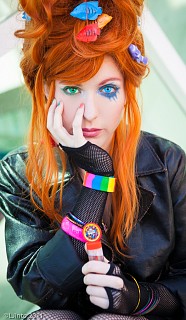 saskatoo Love the fish in the hair! This is an awesome costume, great job!