I didn't make the weapon yet, still thinking about the materials because I want it to move.

I will upload photos soon!

She's my most favorite character from this game, and probably one of my most beloved Final Fantasy characters. Sweet, kind, strong, caring, cheerful and always has positive attitude and hope, she and Snow avoid the party of becoming depressed.

This costume seems easy to make if you don't pay attention to details. Clothes were easy to do. I used knit-silk for the pink top and pink sweater, and I used light orage knit-silk and dark orange "tergal" for the skirt. I used white fur with long hair for the fur skirt and brown skai for the weapon supporter. The top has a double layer, but the sweater has a single layer. I did the sweater with double layer first, but the knit-silk fabric was not stretchy enough. The skirt is made in three parts and I dyed it with bleach, then dyed the lower part with acrilic paint mixed with water (half of each, not too much quantity). I had to sew the fur by hand because my sewing machine can't stand sewing long fur. I also sew the pleats by hand until the middle of the fur skirt, so the fabric could open in the lower part just like Vanille's. I dyed the fur with brown dye I found in the supermarket. When it was ready and dry, and after brushing the fur, I used brown fabric painting mixed with some water in a small glass to make darker highlighs to the fur, so it would look less monochrome. The boots I used were my old Rose boots and I made a pair of boot covers with a lovely satin-crepe in a soft yellow/peach/soft brown color mix I love. I used felt inside for stifness, as always. I made them in a full one piece, closed at the back with zippers. This is the first time I use zippers, and it looks better in this kind of boots because velcro only comes in white and black colors here, and it would be noticed too much due to the boot covers color. I added white fur with shorter hair that was a left over from the Luffy's costume of Jose and adjusted it to the boot covers with some velcro inside. I adjusted the boot covers to the boots with black elastic.

I made the little bag with a fur called "pirineo". It's like an ironing fur. I used white felt for the decorations around the bag. I also did the silver round thing with sculpey and wire. I used brown leather cord and beads for the decorations in the silver round thing and more brown leather cord (like 1 meter and a half) to tie it around my hips. The yellow fabric is lycra and the two ribbons are satin ribbons. It's glued with Gutermann fabric glue in the back of the bag, as well as the brown leather cord, which is glued under the yellow piece of fabric. The bracelets are metallic and I painted them in green and blue, the rest are silver and gold as they were when I bought them. The white bracelets are made of white foam sheet pieces that were a left over from a previous cosplay (I think it was Calintz one). I used white velcro glued with translucent contact glue to tie them around my wrists. I made the necklaces with macrame cord, painted with brown fabric painting. I did the decorations with leather cords in turquoise and orange color, leather orange ribbon, and white foam painted with nail polish (orange and mixed blue nail polish with green warhammer painting), cut in small rectangles. I glued all that with Gutermann fabric glue to the macrame cords. I sewn brown cotton ribbon in the back side and silver necklace hooks so I can put and quit them.

I made the belt and the weird thing in the back both with double layered foam and lined with double layered black felt. I cut the second layer (the one that can be seen) in stripes, one by one and glued them to the belt with fast drying white glue. I did the same with the thing in the back, which was more difficult because it has a more intrincate design. I made the triangle and rounded decorations in silver and blue colors with sculpey, and later painted them in those colors with silver painting and blue nail polish. The squared decorations in the belt are made with foam, previosly covered with the white glue and pinted when the glue dried. I used thumbtacks in each corner of each square. I glued brown cotton ribbon for the rest of the decorations with the white glue too. I glued and sewn velcro in the belt, were the round and blue decoration is.

I used varios materials for all the accesories. I used the leather strip of a bag of my aunt Rosie to tie the fur skirt. The beads are of various types: the big white ones are called round tube beads, and the small white and black ones are called rondelle beads, and they are from ebay. I also bought some plastic long beads in a Chinese store. All the colored beads are painted by hand with nail polish (yellow, orange, blue and turquoise). I used foamy for the red things in the middle of the three rows of beads and I painted them with red nail polish. I used translucent plastic tube painted with synthetic silver painting for the tubes that support all the beads in the chest. I used iron nuts for decorations and cotton brown ribbon to support all the beads and the thing of the back. The weird light beige pot thing is made with white card covered by sculpey and I carved the decorations with a needle (yes, I found sculpey in Favego. I was so surprised to find sculpey here, in the bottom of the world). I also used the plastic tube as beads, cutting it in small pieces and painting them with nail polish too. I used more brown leather cord for the beads instead of thread, because there will be less probability of them falling this way. They are made of wood and plastic but they have a very light weight. I also noticed Vanille's beads really have brown cord leather inside, so it was fine using it after all. I tied the cords and the end of the three row beads and used more cord to tie them around my hips under the skirt, so they fit better and can't move at all. I used little necklace silver hooks I bought to tie the horizontal rows of beads on my chest and being able to put and take them off easily. I only used denim thread for the small, vertical beads that are on the waist horizontal row of beads. I adjusted that row of beads to a piece of plastic tube glued with "la gotita" (it's like super glue) to the red piece of foam from the fron three rows of beads, and also sewn the tube so it would be more secure. I sewn the long vertical rows of beads in the skirt, and also glued them with Gutermann fabric glue inside. I also sewn and glued the 11 rows of beads in the back thing.

The beads took me a week and a half, and I had to try different techniques to gradient the orange skirt with a piece of the orange fabric before being sure of what was going to work, during a week. The fur skirt was also a lot of work, as well as the thing of the back and the belt. She has so many little details! But it was worth. I loved the result and this is one of my favorite costumes. 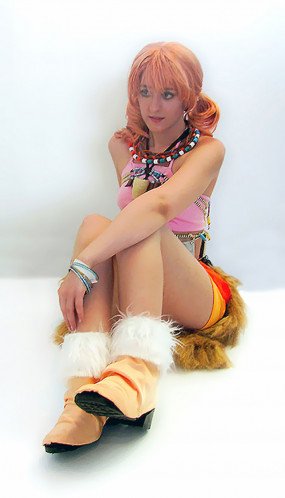 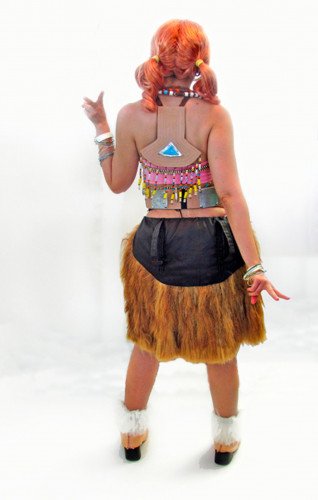 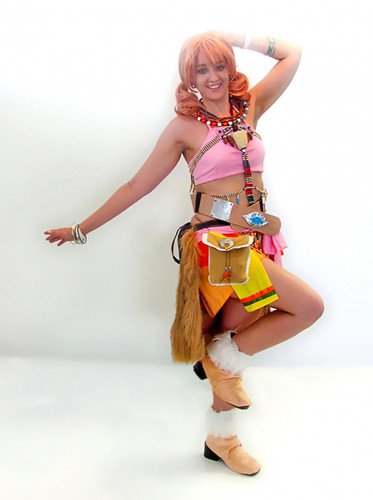 Gummibar I love your Vanille! You look so cute. <3 I like how colorful it is. Keep up the good work!