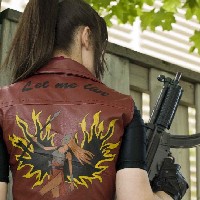 While I was on a DOA kick I decided Kasumi's C2 outfit would be a good choice. I had bought a bunch of white brocade to make the outfit (IcePhoenix actually suggested the fabric choice).
I do however want to remake the obi in a slightly darker pink. I did line the dress with the really light pink satin to add that extra effect. The sword was the one I used for the C1 costume, I just added a gold cord and pom poms to it instead of the red ones.
Everything on this costume was made the same way I made C1. The only exceptions are the gloves with the gold knit on the tops and the design painted down the front is cherry blossom petals and not Crane's. The petals I based off the Bome figure. Every reference shot was different and I really didn't know what to do with it. For such a simple design it really was a pain. I also took note of what real cherry blossoms looked like and added a bit of flare to them. They look sort of animated. I wasn't going for a realistic look with them.
The wig I had already from the previous Kasumi costume (Linda XXL in auburn)
I somehow managed to loose my white sandals I used for C1 so I picked up another pair to replace them. They are a total pain to walk in and they want to slip off my feet constantly T_T
Jay had made a Ryu Hayabusa costume to wear to the cosplay picnic in Toronto and wanted me to wear a Kasumi one. I thought that would be a good chance to grab some shots of the C2 varient.
I ended up being super tired at the picnic and not all the photo's came back well. I just look too tired in most of them. So IcePhoenix suggested we get some winter shots to mimic the winter stage in DOA. Hopefully this winter I can get those done :) 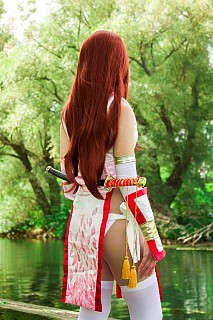