Wig - I finally styled the wig, but no pics till after animeNEXT :p

Skirt - I had extra red fabric lying around from when I made my orisis red jacket for Judai. Luckly I manage to have just enough fabric to make the skirt. I did that pleated thing or whatever you call it so I ended up using a little more then what I usually would have for the pleats. Unfortunately though I ended up having to iron it in several times before I was satisfied. I've never actually done the pleats(correctly) but I guess thats ok for a first time and my back will be covered and everything. The white stripe was compliments of regular old binding tape. I have a zipper in the back which will also be covered once I'm done making the cover up and everything.

Cover up - I actually used a shorter piece of fabric then what I intend for this and of course that was accidental. Its fully functional with hook and eyes on the skirt and the cover up. I didn't want to sew it to the top or the skirt so I figured hook and eyes or snaps would be the best route. Hook and eyes seemed like they'd be more fuctional since the snaps would have been smaller snaps and not the big heavy duty ones used on the breast plate. I used the rest of the white binding tape to kinda compliment the top(which isn't even seen) and for the rest I just folded it back and sewed for nice smooth edges.

Leg things(or whatever) - The leg pieces weren't the hardest thing I ever came up with. At first I saw them and I figure "meh some thigh highs?" But when I saw how they had crosses on them then I figured they weren't just REGULAR thigh highs. So instead I took swim suit fabric and used that to make the leg pieces. The crosses were drawn and cut out and hand sewed. I will probably be getting this stuff called "thigh high glue" to keep my pieces from falling and looking droopy.

Arm pieces - Used the same fabric used for the thigh high things. I made them almost skin tight but they're functional and I can get them on :D

Top - The top is fully fuctional with 6 snaps and hook and eyes at the top. Even though I have to slide it over my head it ended up taking me a heck of alot longer then I wanted it to take so I think it came out ok. I used a white bottomweight type fabric and used binding tape for the edges. The extra red around the outside of where the binding tape is was just red thread that I sewed in around it. The crosses and what not were hand sewed.

"red things" - Not really sure what to call them exactly but I just cut 2 pieces of red pleather and sewed them together. I then went around the holes the arms go into and the whole outside of it with yellow binding tape. Hook and eyes are used to connect those pieces to the top.

"breast plate" - Who else thinks its sad to make a breast plate out of frikking pleather <,< Oh well, it can't be helped. I'm still a "prop noob" and I need something that's functional for this. Did a bit of detailing and make sure to include those snaps for the back (:

belt - FInished off the belt in white and silver pleather. I have a snap on there for the sword sheath and 3 eyelets for buckling :o

sword - Ok so for the sword I used some left over polycarbonate sheets that I had left from takuto's star swords for the blade. I used a piece of wood that I had my dad cut for me for the handle, and 3/4 used duct tape for the handle thing. I used silver spray paint and glued the 2 pieces together for the blade. For the handle first I glued it to the smaller piece of wood that I had inside the polycarbonate to help it maintain shape then I used duct tape around the handle to keep it stable. I painted over the duct tape with a greyish blue(or my attempt of). I used silver to paint the cross on as well.

I used duct tape around the roll of duct tape since I cut it in half and the edge were rough. Then I painted that with light blue paint and silver around the edges. I wanted to detail it better but it didn't seem like I had enough room so I put Xs on both sides and just stuck purple gems there. I wanted to use blue but there wasn't enough contrast because the blue was a light blue like the paint. Lastly I glazed over the paint to make it nice and shiny and to protect the paint that was obviously painted over duct tape.

Sheath - I made the sheath from red pleather and a few details of white and silver pleather. It snaps on to the belt and is removable. Couldn't really see good to detail the bottom but the nice gem looks like it'd be fitting. Also a polycarbonate sheet I had left over from the sword and my star swords was used to help the sheath keep shape.

Shoes - Ok so I found a black pair of shoes, and spray painted them white. This time I used regular spray paint because I didn't feel like spending a bunch 'a money on smaller cans of actual shoe spray. The "added on pieces" are like shoe covers and are functional with valcro that opens and closes them. The little pieces in the back actually work like foot holds of some sort which is good because now I don't have to try and figure out what to do with them otherwise. Those pieces are made from pleather and the cross was hand sewed on. 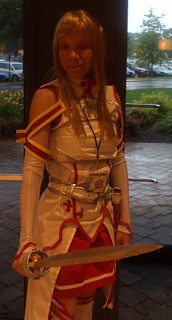 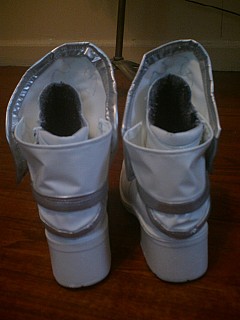 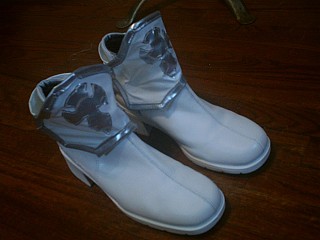 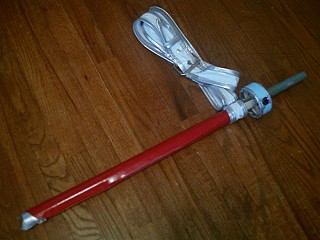 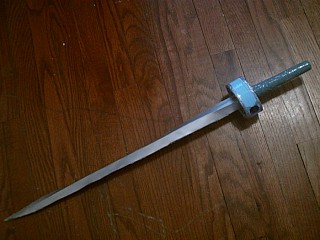 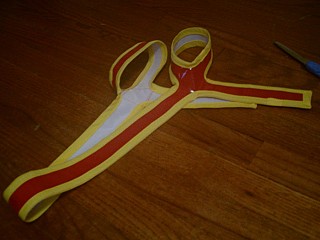 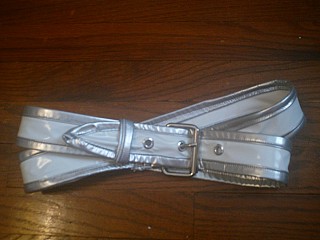 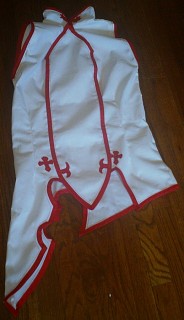 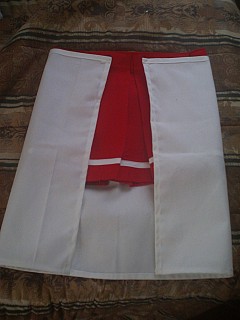 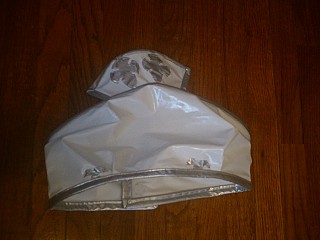 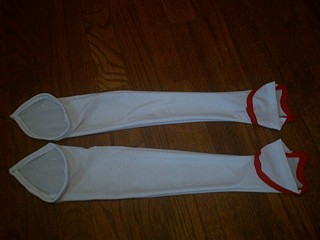 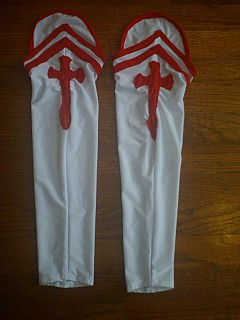 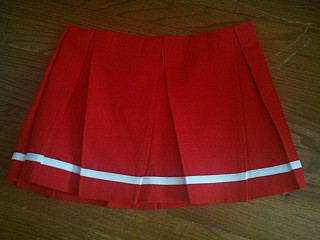